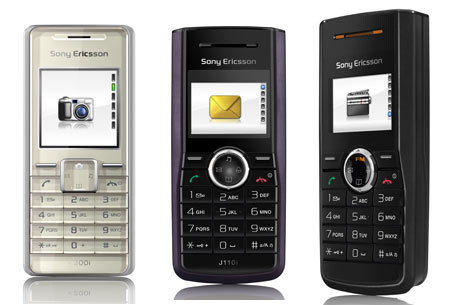 Sony Ericsson has four new candy bar handsets on the market, aimed very much at those who just want the basics for a budget price – the K200, K220, J120 and J110.

The K200 is a camera phone – but with a very basic VGA camera. The camera and the on-board photo album are accessible with just one click, with enough included memory to store around 40 snaps. There’s one-touch access for your phone book (which can store up to 300 contacts) and a talk time of 8 hours. It should be available in the second quarter of 2007 in either Metallic Black or Light Champagne. The K220 is similar, but adds an integrated FM radio with RDS and 10 pre-set stations. You can also use it as a radio alarm clock. Again available in the second quarter, this time in a choice of Frost White or Ocean Blue.

The J110 is a ‘back to basics’ phone with large, legible keys and one-click access to commonly used features such as the text message menu, ring volume and alarm clock. And as it doesn’t have much in the way of features, that means a longer talk time of 9 hours. The J110 will be available from the second quarter of 2007 in Soft Cream, Smooth Grey or Precious Purple. The J120 follows a similar specification, but adds an FM Radio, a stereo headset and loudspeaker. In Night Black, it’s also available in the second quarter.