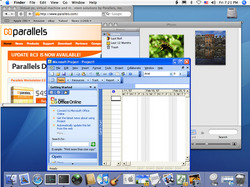 Parallels has updated its Desktop for Mac software, which allows users running Intel-powered Apple Macs to run Windows, Linux or any other operating system at the same time as Mac OS X – without re-booting.

Other features include a migration tool called Transporter, which allows you to move an entire PC’s content to a virtual machine on your Mac, full-feature virtual CD/DVD drive, support for Boot Camp partitions and true drag and drop – easily share files between Windows and OS X by dragging documents and folders from one desktop to another.

Existing users get the upgrade free, new users can download a free 15-day trial of the software.