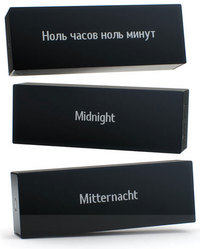 From the maker of the Optimus keyboard comes an equally quirky clock – the Art Lebedev Verbarius clock.

The diffference? It doesn’t go for numbers, it goes for words. For example, “forty-five minutes past four”, “fifteen minutes to ten”, “six forty-five” or “midnight”. And yes, you can already see the problem – I would say “quarter to five” rather than “forty-five minutes past four”, but as this clock is available in English, German, Spanish, French and Russian as standard, the intricacies of each language seem to have been passed by.

But if you are sold on the idea and the look, you can order one now, with a pre-order price of $158 (around £80), rising to $183 after the official September 1st release.