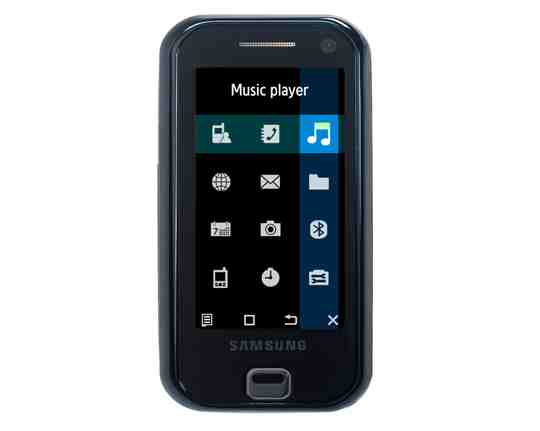 One of the best, although some cynical bloggers would also say one of the worst, things about Samsung is they always launch so many phones. 3GSM has been no different with around a dozen or so new handsets taking their bow. The downside of this is that some times some phones get lost in the rush.

So to keep things simple here’s a quick trawl through the best of the new Samsung breed, along with our comments and, when appropriate, links to videos.

Samsung F700 – In our books this the one to watch for. Samsung has delivered a large touch screen phone (it has a 2.78 inch display) with its own pull out QWERTY keypad for when you need to do some proper work. Other than its screen it has very impressive looking five mega pixel camera, complete with auto focus, a decent looking web browser and the souped up version of HSDPA which in theory can run up to seven Mbps. The only downside is that you’ll have to wait until Q3 before you can get your mitts on one.

Samsung F500 – Now this is clever. It is one of Samsung’s split screen handsets, see also the F300 music phone, which has the phone on one side and a large multimedia ready display on the other. It also has a top that twists enabling the user to set it up as a stand to make watching vids easier. It is also compatible with a range of video formats including, for the first time on mobile apparently, DiVX. It also has plenty of storage on board (410MB) and is HSDPA compatible. Video here.

Samsung F300 – This is also very clever. Its another split phone with one side looking like a Samsung MP3 player from a year or so ago, and the other side housing all the essential phone gubbins such as the key pad. It is also A2DP compatible, so you can listen to music wirelessly via your Bluetooth earphones, and it has an on board FM radio. I am slightly disappointed with the storage (just 100MB which of course can be uprated via a MicroSD card) and the lack of 3G/HSDPA. Video here.

Samsung U100 – Now this is bonkers, it is the size 0 of mobiles and is just 5.9 mm thick. It is also not the most feature filled mobile, but it does had a 3 mega pixel camera, music player, 70MB of storage and a TV out socket. Video here.

Samsung P310 – Yep the card phone is back. The P310 is skinny, comes with its leathery-type carry case and, in our eyes anyhow, is rather cool. Unfortunately it is not as retro-looking as its predecessor the P300 and it is GPRS rather than 3G. Nevertheless with its bonus battery (built into the case) and striking design it is still one of our 3GSM highlights, It goes on sale via Vodafone in a couple of months time.

Samsung U700 – This has biz phone written all over it. It is a stylish slider with HSDPA, a 3 mega pixel camera and decent web browser on board. Like all phones in Samsung’s Ultra Edition II series it is very skinny.

Samsung I-520 – And last, but by no means least, is this Symbian powered smart phone. It is super slim, HSDPA friendly and stacked out with smartphone style facilities. It comes out in April.