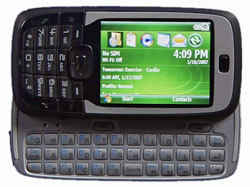 HTC has finally launched its much-rumoured Vox device (or S710 if you prefer) – a smartphone with slide-out full QWERTY keyboard.

Slide-out keyboards are nothing new for HTC, most of their top sellers feature one. But this time the sliding keys are as part of a smartphone rather than a more bulky PDA. Other features are what you would expect from a smartphone – 2.4-inch QVGA display, 2 megapixel camera, Wi-Fi, 128MB of Flash memory, 64MB RAM and microSD support.

And like all new smartphones, there’s Windows Mobile 6 on-board. As yet, there’s no detail of which network will take it, but there’s a good chance of re-branded version coming to a network in the coming weeks/months.

Stop press: Orange has now announced it will be launching this device on its network during the first half of 2007.