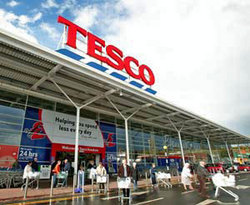 With all the excitement surrounding the iPhone and the growing popularity of the Mac against the PC, Tesco has decided it’s a good time to invest more space for Apple products in its stores.

The company initially trialled an “Apple Zone” in its Milton Keynes store with some success, which has led to the company trying out Apple in other locations, namely Broadstairs, Leicester, Stockton, Addlestone, Pitsea, Merthyr Tydfil, Barrow, Leeds, Wath upon Dearne, and Homeplus Chelsmford.

Each will offer around 75 Apple products, with the areas being staffed by specially-trained salespeople. Trained to sell that probably means – I wouldn’t chance a repair of an old iBook..