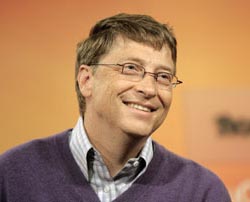 Amid all the fuss around the Wii and PS3 launches, Xbox 360 has quietly continued to rack up sales in the background, boosted by new titles like Viva Pinata and Gears Of War. But Bill Gates chose a post-CES interview to tell the 360’s rivals where to stick their hype.

“We wanted to be the guy with the small box that costs less,” he told Dean Takahashi off the San Jose Mercury News.

Bill also got stuck into the Wii’s low resolution and lack of online gaming, talked IPTV, gloated over Sony’s PS3 processor woes, and said he’s not worried about Xbox 360 cannibalising sales of Media Center PCs. The full transcript is well worth a read for an insight into Gates on Games.

One thought on “Grr! Bill Gates comes out swinging for Xbox 360”