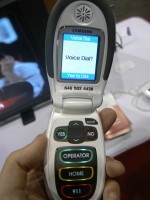 Not everyone wants an all-singing all-dancing multimedia computer. That’s what Nokia calls its high-end mobile phones these days, by the way. But there’s still plenty of people who just want a phone they can call people with. Think your parents, or grandparents even.

I hooked up with Jitterbug last night, who were showing off two handsets at the Digital Experience event. The Jitterbug OneTouch (pictured) doesn’t even have a numeric keypad on it. The green button calls the Jitterbug operator, the yellow one calls a number of your choice (it’s set up by Jitterbug when you order the phone), and the red button calls 911.

Meanwhile, to access other features like voicemail, you answer Yes/No questions using the buttons under the screen. It really is the most grandparent-friendly mobile I’ve seen, although if they’re a bit more advanced, it can also hold a list of other contacts that can be scrolled through to call. 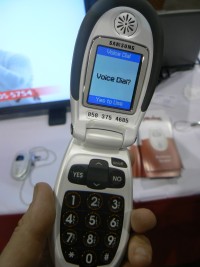 Meanwhile, the JitterBug Dial (right) does have a numeric keypad, but otherwise works in the same way with the Yes/No questions to access features. Meanwhile, the number buttons themselves are big and backlit.

Both phones are made by Samsung for Jitterbug, and are reassuringly solid-feeling clamshell phones. They have a cushioned ear-bit which is also compatible with hearing aids, apparently. They’re $147 each, with call plans starting at $10 a month. It’s only just gone on sale in the US, but the company told me there are “definite plans” to expand this in the future.

Over on Shiny Shiny they’ve got some video footage of the Jitterbug.