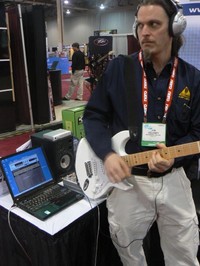 It’s the perfect name for a guitar that connects directly to your computer, when you think about it. The iAXE393 lets you record directly to your hard drive without any fiddly kit in between the two, and also lets you jam with your own MP3 tracks of Rachel Stevens AC/DC.

Software is included to record multi-track rawk ballads and edit them to sound professional (i.e. like Slash, rather than like a hamfisted amateur), and there’s a built-in headphone port so you don’t wake the neighbours with your solos. Oh, and you can use it as a regular guitar too, by connecting it to an amp.

The iAXE393 is out in the US and costs around $99, but apparently sells around the world, with us Europeans particularly keen. If Jimi Hendrix was part of the iPod generation, he would’ve owned one. Although hopefully he wouldn’t have set fire to it.