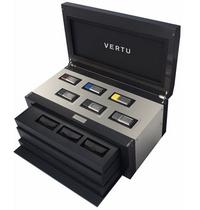 There’s obviously a strong demand for overpriced handsets amongst the rich and famous. Following on from Vertu’s millionaire-friendly Signature Duo handset comes a whole series of handsets from the company, all themed around motor racing.

The Vertu Racetracks Legends phones are a limited edition range, covering six of the world’s most famous racetracks. The series starts with Monza (red) and Silverstone (green), followed by Le Mans (blue) and Indianapolis (black), with Monaco (yellow) and Nuerburgring (titanium grey) bringing up the rear. The phones feature racing tread rubber detailing and a laser etched map of the phones respective race track.

Small in number, collectable, pitched at the millionaire set – you know the price is going to be high. Expect to pay at least £3,000 for each handset. And if the bug bites and you decide to pick up all six, there’s a special case to store them all in, made of carbon fibre – the price of that to be confirmed, but don’t expect a bargain.