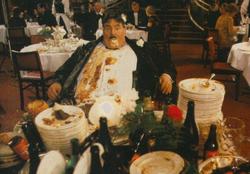 Humanity is piling on the pounds – if global warming doesn’t make us sink into the ocean, the sheer weight of our ever-more lardy guts is sure to do the job. Thankfully, help is at hand. Ukrainan boffin Dr Hryhory Chausovsky has invented a talking plate, which asks “Where is your willpower?” if you pile too much food onto it in one serving.

He’s also invented a bunch of other fat-busting gadgets, including a belt that sets off an alarm when your stomach expands a certain amount during a meal, another plate that plays “fast and aggressive” music if your fork hits it too often (signifying that you’re stuffing your face), and a pair of ‘food spectacles’ which make nice food look, well, horrible.

I generally rely on the disgusted faces of my fellow diners to tell me when I’ve had enough. But each to his own.

One thought on “Need to lose weight? Try a talking plate”