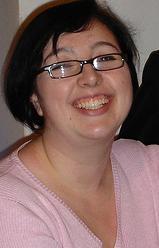 It’s with great sadness that we bring news of the sudden and untimely death of Star C Foster. She was literally a shining light to her friends and family, and to the countless number of people she ‘met’ online.

A few of us at Shiny had been blessed to meet her in person, but for all of us – whether we met in person or conversed online – it’s been a terrible shock.

Star wrote in her own inimitable style on Shiny Shiny, almost since it began, as well as on her own blog (Sarcasmo’s Corner), at Phillyist, and elsewhere online.

Phillyist reported the news: “We regret to inform you that Phillyist co-editor Star C. Foster passed away this morning [Sunday 10th December]. Star had been complaining of a pain in her foot, which she thought had to do with some bad moves she’d made at dancing class, but it turns out there was a tumor in her leg which matastasized and went to her heart. She had a seizure this morning, her boyfriend Mike called for an ambulance, she had another seizure on the way to the hospital, and then died of a pulmonary embolism.”

Though I personally didn’t know Star well, and had only communicated with her via the web, it doesn’t make the news any less sad or shocking. She will be missed by many.

As I read through the increasing number of online tributes, I was struck (but not surprised) by how many people loved Star, and sobered when I realised (a little selfishly, I know) that she was just one year older than me. Life is fragile, and precious, but I can tell Star made the most of every ounce of it, despite being taken far too early.

My words run out, but there are many others who have echoed loving tributes to Star. Here’s just a few:

Star’s boyfriend Michael: “In my many moments of not knowing what to do, of trying hard to find something to occupy the time so that I don’t have to confront things, I read these blogs. Reading through other people’s memories of my dear, lovely, beautiful Star helps. It just helps… Everyone in the world is seeming to come out and join their voices together. And she would be embarrassed. So let’s keep doing that.”

One of Star’s friends at Life in the Pink: “The thing you have to realize here, is that it is traditional, when someone dies, that everyone talks about how awesome they were, and no one says anything bad. But when Star was alive, no one could ever think of anything bad to say about her.”

Jim Genzano from Phillyist: “When I heard that Star Foster had passed away, I didn’t believe it. Part of me still doesn’t. And it’s not just because she was so young and it happened so suddenly, although she was and it did. It’s mostly because she was so vibrant. I’ve never met anyone as fiercely alive as Star. All of her friends were always amazed at the sheer number of things she was doing at any one time. Star Foster was easily one of the kindest, coolest, smartest, funniest, most courageous, most talented, most giving, most wonderful, and just all around best people I’ve ever known.”

Duncan Riley: “her writing spoke volumes for the wonderful person she was.”

Some further tributes include (and there are more being added as I write this):

The next post gives details of Star’s Memorial Scholarship Fund.