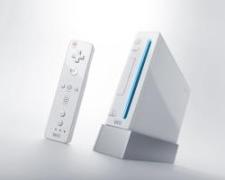 As you’d expect from Shiny’s Ninendo Wii blog Wii Wii, there’s coverage on the site of yesterday’s US launch of the Wii console.

Check out some video footage of Reggie Fils-Aime (that’s the President of Nintendo of America) giving a rousing speech on its merits in New York, the obsessives who took a week out of their lives to queue for one and the moment the first in that queue gets his hands on one. It’s all very moving stuff.

For all of that and much more, head over to Wii Wii now.