First, let’s clear up a couple of myths. Fraudsters aren’t rooting around in your rubbish looking for receipts. They can get all the information they need in a couple of hours online. And they don’t want to clean out your bank account. They want to steal your identity to rack up debts – credit cards, loans and mortgages – and maybe use it for immigration rackets or even terrorism. Crumbs.

This is according to personal information management service Garlik, which conducted a survey of 100 (presumably reformed) criminals to find out how identity fraudsters are actually operating, as opposed to how we think they’re operating. Tech Digest first interviewed Garlik back in August, but the company has now launched its DataPatrol monitoring service, so I caught up with CEO Tom Ilube to find out more about it.

“The whole business of ID theft is becoming much more professional than it was,” says Ilube. “Organised gangs and professional criminals are beginning to move into the area of ID theft in the same way they did with credit-card fraud. It used to be the odd person rooting around in your bin, but that only accounts for 1-2% of ID theft nowadays. What they actually do now is go to online sources.”

You’d be forgiven for wondering if this is scaremongering, given that Garlik is selling a service that deals with online personal information. If they were selling super-secure rubbish bins, the emphasis might be different. But Ilube says that’s not the case: Garlik’s criminal survey was actually a key factor in leading the company in the direction it’s taken.

“The average person’s identity is worth £85,000 to a professional fraudster,” he says. “They’re not after the money that’s in your bank account. They’re trying to get enough information about you so they can start to get credit in your name, and open up other lines of credit, from cards to personal loans to even mortgages.”

The UK is particularly popular for this kind of fraud for three reasons, says Ilube. First, it’s relatively easy to get credit here – you can barely walk into a shop without being offered a storecard nowadays. Second, we’re relatively wealthy, so there’s more credit to be had. And third, high broadband penetration means we’re giving away all kinds of personal information online – unwittingly or otherwise.

“70% of people give away their name and address online if a site asks them to,” says Ilube. “Just 25% will on the telephone if speaking to someone. And if someone came up to you on the street and asked for your name and address, chances are you wouldn’t give it to them. Online, it seems more computerised and less personal.”

Another factor is that in the last ten years, Ilube estimates around 700 million records of personal information have been put online, from bodies such as Companies House, the Land Registry, the Electoral Roll and local councils. In short, there’s loads of information on any one person available online, for use by fraudsters. Garlik’s aim is to make a product that helps us realise just what’s out there, and what we can do about it. 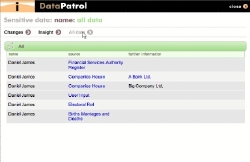 That product is DataPatrol, which launched last week, helpfully just before the release of a report by the UK Information Commissioner warning of the dangers of sleepwalking into a “surveillance society” thanks to all the data being gathered on us. DataPatrol is a monthly monitoring service, which gathers together all the information that’s available on you online in one place, so you can see it, and decide what (if anything) to do about it.

It also includes your credit report, and monitors the whole shebang on a monthly basis, alerting you if some new information has gone online that may compromise you. The service is initially free, but the premium service will eventually cost £29.99 a year.

“The starting point is to make people aware,” says Ilube. “We want to help them understand why this information is there, what practical steps they can take, and provide an easy way to keep monitoring it. It’s not what they’re going to spend their life doing. At least, not unless they’re extremely paranoid!”

It’s certainly an intruiging service, and well worth signing up to while it’s free, if only to check your credit rating and see what the internetweb has to say about you. Ilube says Garlik has already been approached by three banks who are keen to offer DataPatrol to their customers, as an incentive for them to try online banking (the theory being that DataPatrol will make them feel more secure about using the web for such a sensitive activity as banking).

One thing that DataPatrol doesn’t address is the data being gathered by private companies on us. Think of supermarket clubcard schemes, for example. In the previous Tech Digest interview, Ilube said this would be another area for Garlik to target. Is this still the case? In a word, yes, but there are clearly obstacles.

“Commercial organisations need to change their attitude towards the personal information they hold on individuals,” he says. “At the moment, they see it purely as a commercial asset. They don’t related to it as information they’re holding in trust on behalf of their consumers.”

In other words, the companies aren’t co-operative enough about revealing information on their customers to make it feasible for Garlik to offer some kind of service around this. But Ilube expects this to change as consumers become more aware of their personal identity, and more assertive.

“They’ll start to say to these companies ‘Look, show me what you’ve got on me, and what you’re doing with it’. And that will change the dynamic,” he says. “I don’t think UK high-street companies have appreciated that at all yet. The big online companies are beginning to though. AOL has appointed a chief privacy officer, for example. But that sort of mindset has not yet got to the executive level of the supermarkets, for example.”

It’ll be interesting to see how this progresses. For now, you can sign up to Garlik’s free trial at the firm’s website. Get set for a shock when you see what information comes back…