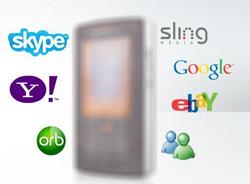 Here’s a few of the key statements from the bigwigs assembled for 3’s X-Series launch in London. It continues over the bump, with the latest quotes being added at the bottom of the post. Also, Ashley is sitting next to me furiously typing out the actual news as it’s announced – click here to read it.

– 3’s Canning Fok gets his retaliation in early to any criticisms of X-Series: “We take the long-term vision. We do things that don’t always seem obvious to people, but they’re actually common sense.”

– 3’s Frank Sixt: “We’re tearing down the walls around the proverbial walled garden, and going naked into the big world outside… We think forcing people into a walled garden of content and services in a mobile broadband world, is simply wrong. And forcing choices and prices on to them is not acceptable. We believe that more choice, which is the hallmark of success of the internet model, is as inevitable a trend for mobility as it is on the internet. We shouldn’t hold back from it.”

– Sixt again, on Slingbox: “Place-shifting is probably the most important thing that’s happened in the media world since tape recorders and Tivo’s introduced the idea of time-shifting. Watch anything you can on your own TV, with your mobile.”

– 3’s Frank Sixt again, on the pricing structure of X-Series: “In the early days, fees will be somewhat higher for higher bandwidth consuming activities, like video streams at high quality levels. But in all cases, we’re going to try to follow as a principle – what is free when you use it on the internet, in principle, should be free when you use it on mobile broadband.”

– Skype’s Niklas Zennstrom: “Initially, people can get their Skype contact list on their phone, see whether contacts are online or offline, click on a contact just like you can on a PC, and make a Skype call to that user. Of course, this is free. What we hope to bring out later on next year is the other Skype services – chat, instant messages, and the premium services like SkypeIn.”

– Skype’s Niklas Zennstrom again: “3 aren’t afraid of disrupting their own market and industry. I’m confident this will give them a lot of new customers and new revenues. The mobile operators who tear down the walls will become the winners of the future.”

– Yahoo’s Dominique Vidal: “Mobile is key for the future of Yahoo. There are 1bn users on PC, and 3bn on mobile. It’s obvious. How long are you spending in front of your PC? Some people, a few hours, but you’re spending a lot of time moving, not in front of a PC, and mobile plays a very important part in this experience.”

– Sharon Bayley, of MSN: “Since we switched our Messenger service to the 3 network in August, we’ve seen 100 million Messenger conversations on the 3 network in the UK alone. That’s one million messages a day… Instant messaging and search on mobile devices like the X-Series from 3 is only going to increase and become a much bigger part of our everyday lives.”

– eBay’s Meg Whitman: “Throughout the brief history of the Internet, there have been key milestones where you realised everything was about to change. I believe the launch of X-series is another one of those. It’s likely to be remembered as the moment when consumers were finally given the right tools to truly experience the net away from their desktops.”

– Joe Costello, of Orb Networks: “To date, in my opinion, the mobile/wireless web has been a bust. It hasn’t come anywhere near meeting its promise, for two reasons. First, infrastructure. It’s been a dial-up kind of infrastructure. That’s not true for some carriers – Hutchison has been extremely aggressive in investing in 3G. But many others are far behind. But that is not enough, just to have the speed, the broadband wireless. More is required: opening up the wireless web. That is not happening today, or hasn’t until this launch. The wireless web has been a tightly controlled walled garden. And tight control limitations wasn’t what made the web take off. It was the opposite: unfettered freedom. What we have on mobile now is what we would’ve had on the Web if Compuserve and Prodigy had continued to control it.”