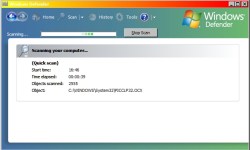 After what must have been one of the longest Beta trials in history Microsoft Windows Defender has finally been officially released. Defender, which began life five years ago as Giant AntiSpyware is one of the best malware cleaners around; it continues to be free to users of Windows XP and it will be included with Vista. Microsoft bought up Giant Software in December 2004 and rebadged the program as Microsoft AntiSpyware; soon after it released the first beta version for XP users and it was renamed Windows Defender in January 2006 when the Beta 2 version was released.

Throughout it has looked and performed like a fully functional program with very few problems reported, and whilst the extended beta test has theoretically allowed Microsoft to iron out the bugs, it also excused them from providing support. Being a free program support is still limited but XP and Server 2003 have now been granted 2 free ‘support incidents’. If you are using the Beta 2 release be aware that it will stop working on December 31st