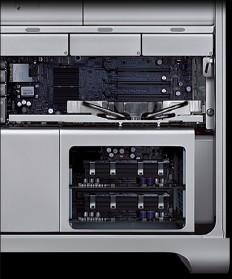 Seems that the speed of Apple’s hardware development is accelerating at present. It didn’t seem that long ago that the first Intel-based Mac Pro came out with 64-bit quad Xeon processors.

However, now Apple could be working on an 8 core update to the Mac Pro (what an update!). Though it’s not a world first, it’s certainly a major step for Apple, and could utilise two Intel “Clovertown” Xeon 5300 quad-core chips.

Of the four Clovertown chips that have turned up on Intel price lists, only two fit the bill as potential candidates for the new systems due to their 1333MHz, 64-bit dual independent frontside buses and 8MB Level 2 cache.

The Xeon X5355 runs at speeds of 2.66GHz per core and will retail in lots of 1000 for $1172 each. Meanwhile, the Xeon E5345 runs at 2.33GHz per core and will cost considerably less, making it the ideal candidate for the default configuration of the eight-core Mac Pro. At just $851 a piece, the 2.33GHz carries the same price tag as the 3.0GHz dual-core Woodcrest Xeon currently available to quad-core Mac Pro buyers.

As it stands, the release of the eight-core Mac Pro hinges on both Intel and Apple. But following Intel’s mid-Nov. quad-core Xeon launch, the ball should be completely on Apple’s side of the court. It’ll be strictly a marketing decision from there, say insiders, as the Mac maker wrapped up hardware preparations for this brawny beast during the tail-end of the back-to-school season.

Apple marches on, it seems.