A host of fresh Disney titles will be coming to the Netflix UK and Ireland TV and movie streaming platform, with the service announcing the acquisition of a new batch of streaming rights from the Mouse House. As of today,…

Asus has teamed up with Disney to make netbook for children called the Netpal. The 8.9-inch machine is targeted at youngsters between 6 and 12 years old and is available from the end of July for $350 from Amazon and Toys R Us.

Like all sub-notebooks, the Netpal’s powered by an Atom processor but this time the Windows XP OS is child friendly and augmented by Disney themes with Mickey Mouse, Cars, Toy Story and WALL-E all featuring.

The Magic Desktop comes with a Disney browser, Disney e-mail and the widget for the Disney Radio station to stream music straight to the computer. There’s Wi-Fi but no 3G which probably is part of supporting the parental controls that also come fitted to make sure that your kids aren’t surfing sites they shouldn’t while away from home.

You get the option of either a 160GB HDD or a 16GB SSD and it’ll weigh a kilo or just over depending on which you opt for. Most importantly though, the Netpal is available in the floral patterned Princess Pink or the Mickey Mouse themed Magic Blue.

It all sounds slightly sickly sinister to me but try telling your children that.

Everyone loves a robot. Especially a sensitive robot. Just look at WALL-E or Johnny-5. When it comes to a robot who has the capacity to feel, we all go a bit gooey inside. The cold, unfeeling, emotionless robot is a metaphor for that fear we have of losing what it is to be human.

Okay, so i'm playing loose with the double-meanings behind the word 'feel' and 'sensitive', because we're not talking emotional robots, or robots with 'feelings' but rather robots which can feel. Like in objects, and surroundings. LIke we can, physically.

Yes, some rather smug looking Japanese researchers/scientists/tech-bods have stumbled upon the perfect answer to the problem of making Robots completely sensitive to their environment. Be it cold, hot, hard, or soft. The skin they've developed looks like tin foil, gold tin foil like the stuff they wrap around marathon runners at the end of the race. Space Blankets i think they're called. Anyway, it looks like that, but it's not. It's a fine rubbery material that has hundreds and thousands of tiny carbon particles inside which allow conductivity of electricity. The skin can be stretched to 2.3 times it's normal size, allowing it to bend around a robot's metal frame and move with joints like a glove.

First things first – this isn’t real. It’s a clever bit of viral marketing for upcoming Pixar robot movie WALL-E. Don’t want any of you to think we’ve actually fallen for some viral marketing, that would be extremely embarrassing. 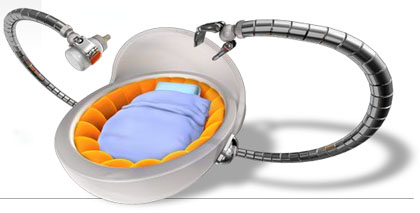