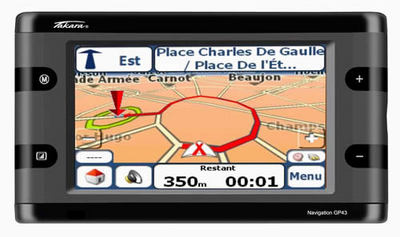 It’s a fact that the Big Three of the satnav world (Garmin, TomTom, Navman) sell the majority of GPS navigation devices, but there are loads of firms scrapping it out behind them. One is Takara, which has announced plans to sell its new GP43 device in Europe.

It’s got a 4.3-inch widescreen display, and ships with European maps from Navteq on a 1GB SD card. It’s also got speed camera and radar locations preloaded, with free updates. Oh, and there’s Bluetooth, and the ability to play MPEG4 videos, MP3 music and display JPG photos.