Always exciting to win at online casinos. Online casino games have grown in popularity in recent years, as we all know. This is partly due to technological advancements across the world, although it is not the only reason. Yes, everything is now available online, and several other companies have focused on…
12th April 202112th April 2021 Chris Price Gaming

The gambling market has gone through a significant transformation over the past decade. More and more software developers are creating new and exciting slot games for their audience. Some innovative companies have even managed to establish trends in their industry. Let’s look at the top 3 developers that stand out from the rest with their…
30th March 20217th April 2021 Chris Price Gaming, News

If you want to learn how to play pokies, you’re in for an extremely enjoyable and easy time. Just like in brick-and-mortar casinos, online slots are completely random and based on luck. Therefore, there isn’t much you can do to influence them in your favor. However, there are a few things you can do before…
11th March 202111th March 2021 Tech Digest Correspondent Gaming

Before entering the business of online casinos and developing one, you first have to go through the facts for how to do it successfully. Like in any other business, many factors can decide if you'll reach the goal or go down with the ship. Online slots are a lucrative business for those who played their…
19th October 2020 Tech Digest Correspondent News

Slots games have a long history that goes all the way back to the Liberty Bell game that was created at the end of the 19th century. While the basics of playing slots haven’t changed all that much since then, modern technology has been used to introduce new twists. More Reels and Paylines The very first…
14th September 202028th March 2021 Tech Digest Correspondent Gaming, News

Rewind the clock back 50 years and the fruit machines that you would be playing then compared to the options in front of you are now are indeed two very different prospects. Your likely gambling adversary back then would have been a set of 3 reels containing classic symbols such as melons, cherries, and…
4th May 2020 Tech Digest Correspondent Gaming, News

Megaways Slots is a series of online video-slots which is having a huge success among players around the world. These innovative games are developed by Big Time Gaming, an Australian software provider, which has released the first Megaways Slot, Bonanza. Since then they have produced a string of successful titles and licenced the Megaways engine…
23rd March 202023rd March 2020 Tech Digest Correspondent Gaming

JVC’s just sent us a bunch of details about their 2009 lineup of camcorders, and because we’re nice, I fancied sharing them with you. There’s the HD range, the G-series and the S-series. The HD range, as you might imagine from the name, are high-definition, the S-series model has dual SD card slots, and the G series is a mixed bag.

Let’s start with the S-series, because the word “start” begins with S. There’s only one new model here, the GZ-MS120. As previously mentioned, it’s got dual SD card slots and you can record continuously, so that if you run out of space on one it’ll automatically swap to the other. In highest quality mode, you’ll get 3.7 hours of recording from a pair of 8GB SD cards. In lowest quality, you’ll get about 20 hours. 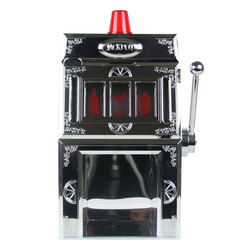 Booze and fruit machines don’t go. Try making your fortune on the Las Vegas slots after a few pints if you want proof.

Yet I’ll make an exception for the Fruit Machine Drink Dispenser, which as you may guess from the name, is a fruity-shaped booze-pouring device.