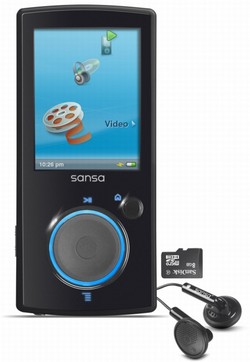 SanDisk has announced its new Sansa View video MP3 player, offering a number of cool features but without costing the earth.

The two new models, expected to arrive in October, are a step up from the Sansa e200 series, offering either 8GB or 16GB of built-in storage, plus up to 8GB of additional storage via optional microSD/microSDHC cards.

The players natively supporting major audio and video formats including MP3, WMA, WAV, H.264, WMV, and MPEG4, plus the ability to convert other formats, including DivX, via the Sansa Media Converter software. It also supports many music download and subscription services including Rhapsody To Go, Napster, and eMusic.