Growth of the internet could outpace its current infrastructure within two years, claims a new report from a clutch of scientists at a university. Unless billions of dollars are invested in new fibre-optic cabling connections within the next six months, internet users could face increasing interruption of service.

“It’s going to be madness,” claimed the project leader, “Amazon will be up sh*t creek without a paddle, eBay will be all at sea, and Twitter users are going to get into a right flap.”

The study is the first to apply the equivalent of ‘Finagle’s Law’ to the internet. It’s a scientific principle which, when applied to the massive dataset collected by the scientists, predicts that things are going to rapidly start falling apart before next Christmas.

The blame has been pinned on spammers, software pirates and child-porn rings, which all use massive amounts of bandwidth – up to a 161 exabytes of data each year. “We think the exaflood is generally not well understood, and its investment implications not well defined,” said a leading industry analyst.

The Chinese government has been the first to respond, changing their one-child policy into a one-strike policy. Under the new system, anyone accessing the internet more than once a day will be disconnected for life. Unless similar action is taken by other world leaders, however, the problem is only likely to escalate.

A few proposals to increase the size of the internet are also on the table, but at a very early stage. One idea would see earth bouncing its communications off the rings of Saturn, using the latency inherent in such a procedure as a storage device.

Another would see the internet being put into a massive zip file, which users would have to unzip manually before use. Linux users are up in arms at this suggestion, demanding that the internet be available as a .tar.gz archive, too. Apple are also rumoured to have plans to launch their own internet, which they claim will be “really fast”.

There’s a school of thought in Science, not widely subscribed to, that says “if it looks impossible, keep trying to do it until it works”. That’s the attitude China are taking towards perpetual motion, and they reckon they’ve cracked it. It’s an electromagnetic drive, which converts electromagnetic energy into thrust via microwaves. That’s a picture of it, up there. 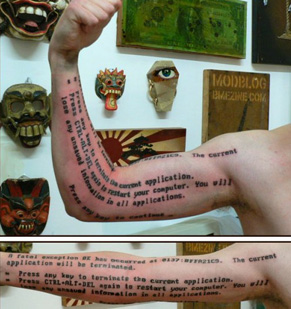 Now, I like to call myself a bit of a Microsoft fan. But why oh why would you want to tattoo your whole right arm with Windows’ Blue Screen of Death? No Apple fanboy would willingly do this to themselves, so it’s got to be a Microsoft user. I’m a little worried about this man’s sanity, admittedly. Why couldn’t he stick with an anchor and his mum’s name enscripted on his bicep?…