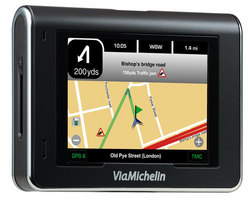 ViaMichelin has announced an upgrade to its software, bringing it to version 7, and offering more intuitive, user-friendly features, including an improved navigation menu, exclusive Michelin Guide content, key information indicators such as battery level, speed, and estimated travel times.

* “Dangerous Bend Alert”, which takes into account vehicle speed and tightness of bend to alert the driver to approaching bends,
* “School Alert”, which is activated during school hours,
* “Roadworks Alert”, alerting motorists to damaged or unmade roads,
* “Authorised overtaking area alerts”, showing legal places to overtake,
” “Tiredness Alert” which alerts the driver every two hours (that’d get annoying),
” “Tunnel Mode” which adjusts screen brightness and simulates the route when GPS reception is lost.