Facebook founder Mark Zuckerberg began the year by pledging to fix the social network’s problems, but by the end of 2018 finds himself and his company under more scrutiny than ever. Martyn Landi reports on what has been a turbulent year for the social media giant.. The billionaire’s pledge was in response to scrutiny about…
26th December 201826th December 2018 Chris Price Gadgets, Social Media

MPs are not allowed to surf the web as free as a bird when sitting in their Commons offices. It turns out that the Palace of Westminster blocks sites considered to be pornographic or inappropriate and, most amusingly of all, this includes the Daily Sport.

We’re led to believe that the block came to light after one MP tried to access a column on the site of the publication self-styled as “world’s most outrageous newspaper” which was written by the Member of Parliament for Montgomeryshire, Lembit Öpik.

The official line from Westminster is that all “offensive or illegal content or sources of malicious software” are blocked with a message to contact the Commons Authority if they wish to view the site. The case of the Daily Sport article was probably the first time an MP wasn’t red-faced enough to do so.

On the on hand, I think it’s important for research that all sites are available to MPs. They need to know what’s going on out there. On the other, I’m convinced they’d just be sitting around looking at pr0n all day.

Perhaps what disturbs me most of all is what an MP is doing writing for the Daily Sport at all. I’m not sure any political opinion’s going to be taken very seriously alongside such stories as “I get £20k benefits and can’t be arsed to get dressed”target=”_blank” and Clarkson’s in the sh*t(ter)! 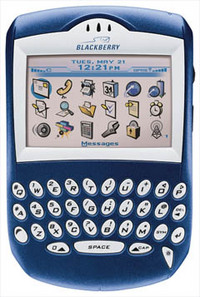 A new report by the Commons Modernisation Committee has recommended that MPs be permitted to bring handheld devices into the House of Commons, so that they can work and check on emails while waiting for long, boring speeches to end.

The boredom factor may be discouraging some backbench MPs from attending parliamentary debates and leading to low morale.