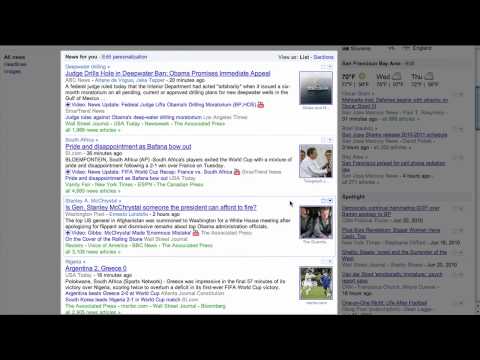 Google's popular News aggregation service has gotten a few significant updates today. Greater customisation abilities will make it easier to check out a news feed tailored to your tastes, and will now include stories specific to your chosen location….

Google are experimenting with human news editors for their Google News section, an area they have traditionally left in the hands of virtual intelligence. Slate Magazine are currently curating the pick of the Google News site, usually a job kept… 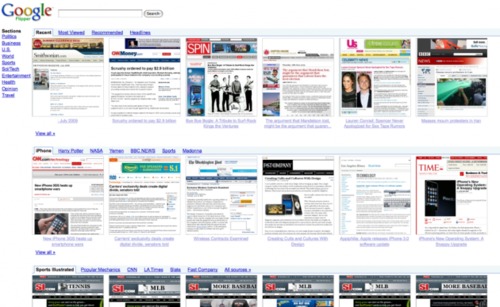 Ever looked at Google News and thought – “I’m loving the content, I just wish it was presented in a more visual way”? No? Me neither, that would be quite a bizarre thing to think really.

But someone at Google obviously has though this by the looks of Flipper – a Google labs project that displays the news in a much more visual way. Check out this screen shot from Tech Crunch to get an idea.

The idea behind Flipper is that users will be able to flip through the news. They’ll also be able to sort the news into personalised sections – by sources, key words, trends, recommendations and the like.

The thing that excites me most about Flipper though is simply its name. Flipper – how awesome is that? You’ll be able to talk to it in the same way Porter, Sandy and Bud used to talk to Flipper the dolphin.

“What’s that Flip, Gordon Brown’s expenses are coming under intense scrutiny? And a man got stuck down a well in Tunbridge Wells?!?” Brilliant – the news will never be boring again.

Flipper isn’t public at the moment – it’s only for the Google boffins – but expect it to launch sometime soon.

The automated news site posted the Chicago Tribune report – originally written on December 10 of 2002 – as new news at the top of its business section, dated it with the day’s date and sent UA shareholders into a CRAZED SELLING PANIC, bringing down the share price by a staggering 76%…

Google has entered the world of Facebook with the launch of its Google News application. It's an "experimental application" which allows FB's users to select from a range of predefined news sections, or create their own with keywords. It's…

Google is set to expand its Google News offering by not only providing the headline and excerpt from a wide variety of online news sources, but also allowing those featured in those articles to comment, and have those comments published alongside the article link.

In theory, the system will work by allowing people or organisations mentioned in news stories to submit stories to the Google News team, who will then display those unedited comments.

Initially launching in the US, and rolling out elsewhere if successful, the scheme poses some interesting questions.