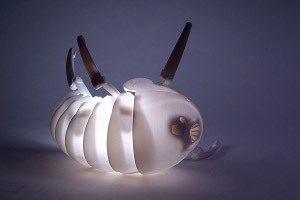 Robots are often developed to do highly unappealing, dangerous jobs, and these beetle-like bots in development by boffins at the University of Madgeburg-Stendal in Germany are no exception.

Their primary purpose in life is to fight forest fires.

Officially called OLE, they could theoretically run at 20-30 kmh, feature ceramic coating to protect them from temperatures of up to 1,300 degrees Celcius, and are able to retract their legs when they sense danger (like being barbecued, for example).

A team of 30 of these concept robots could cover an area of forest as large as 4,400 square miles. Unfortunately, they don’t currently exist, and there’s no clue yet when, or if, they will.

I don’t know what OLE stands for, but it’s probably in German. Any ideas?

Related posts
GlowBots – your pattern-learning robot pets
Ditch your drummer and replace him with a robot – that’s what Jay Vance did, with Captured!
RoboBoa – robot snake meets alarm clock