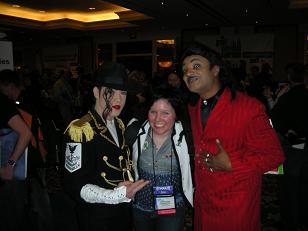 Not only do we get free food, drinks, and shelter from the harsh winds of the Nevada desert, we also get to mingle with the creme de la creme of ‘sleb lookalikes. At CES Unveiled yesterday, we were greeted with Michael Jackson, Little Richard, and Cher lookalikes, handing out press releases. At least, we think it was a Cher lookalike – could’ve been Diana Ross or even Beyonce for all we knew, in our hungover stupor. Plus we’re pretty sure she was a drag queen, rendering that one observation almost useless. But, as you can see, Whacko Jacko and ol’ Richard were gagging for it, you’ll be pleased to note. Yep, I still have it, *blows on fingernails*