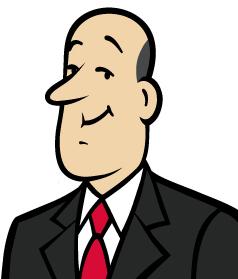 After a few years of being Jeeve-less, search engine Ask.com has brought back its iconic butler following, the company claims, “public demand”. The company told Tech Digest that research has shown that users “missed his friendly, human, touch”.

Jeeves will be returning in 3D, given a makeover by Framestore – a company that worked on The Golden Compass and Chronicles of Narnia. He’s also got some new threads, courtesy of Savile Row tailors Gieves and Hawkes. They do rather make him look more like a banker or a politician, though.

Jeeves was originally inspired by the butler to PG Wodehouse’s “Wooster” character, which has come to represent the stereotypical English butler. He left Ask.com in 2006, but Ask.com’s traffic hasn’t exactly skyrocketed since, which is presumably the reason behind his resurrection.