We’ve reached the point of no free returns, says ParcelHero

2 in 3 UK households can get gigabit broadband, claims Ofcom

What if you never had to plug any of your gadgets in to charge them ever again? No stray wires running around your walls, no need to remember to pack numerous chargers when going on holiday and of course there are the financial and ecological benefits as well.

Well, this could well become a possibility. Nokia has got their boffins in Cambridge working on a technique whereby a phone can remain in standby mode and effectively charge itself using just ambient radio waves.

I’m no scientist, but I’ve done the research and I understand it as thus:

Waves in the air, such as Wi-Fi, radio, television and so forth can be harnessed and converted into enough juice to power your gadgets.

The system needs a bit more developing though, currently the boffins are only able to gather between three to five milliwatts of power and they need this figure to be more like 50 milliwatts in order for it to work in practice.

If they do manage to master this system, the possibilities are pretty immense. On the flip side, how scary is it that, potentially, there is enough electricity floating about in the air to charge mobile phones? How our brains don’t get frazzled remains a mystery to me.

Welcome to another iPhone-inspired Tech Trumpet.

Following on from iPhone Bloom comes this interesting “music” created with SynthPond (iTunes link) by Zach Gage. It’s all quite random but you can get some nice ambient sounds from it…

It’s time for another edition of Tech Trumpet.

This week, I have been mostly playing with “Bloom” for the iPhone. Developed by Brian Eno and Peter Chilvers, the application offers an audio-visual experience simply by touching the screen or letting the instrument play itself.

“Bloom is an endless music machine, a music box for the 21st century. You can play it , and you can watch it play itself,” says Eno… 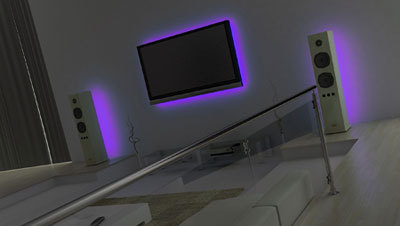 One manufacturer in particular has been offering an ambient glow with TVs – but now everyone can get one with the Illuminaire flat TV ambient lighting.