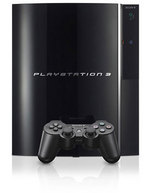 PS3 is still too expensive. Sony argues the point, of course, but the sales figures show that it’s suffering in comparison with the cheaper Xbox 360 and Wii. So it’s no surprise that when a rumour springs up about a PS3 price cut, it spreads like wildfire.

Such is the case this week, with well-sourced reports claiming that Sony’s about to unveil a cut-down PS3 for £299, with a smaller 40GB hard drive, no USB ports and no backwards compatibility with PS2 and PS1 games.