It’s the end of the world, nay, the universe as we know it, and in Mass Effect 3’s capable hands we feel fine. A stunning game, read on to find out just how good the concluding entry in Bioware’s sci-fi space opera trilogy is.

Can you remember a time when you didn’t know what happened at the end of Return of the Jedi? Sure, the Ewoks and other muppets softened the impact of that particular science fiction series’ dramatic conclusion, but on the back of the quality of the first two films excitement had you coiled tighter than an ACME spring. It’s no act of hyperbole to place Mass Effect 3 in a similar position, with anticipation as to what that the trilogy’s conclusion will bring palpable across not just the gaming and sci-fi communities, but with near anyone whose looked up at the stars and dreamed.

That Mass Effect 3 manages to exceed expectations, placing its fiction firmly among the canon of both the greatest gaming and sci-fi worlds ever created, is an achievement rarely pulled off by the medium. 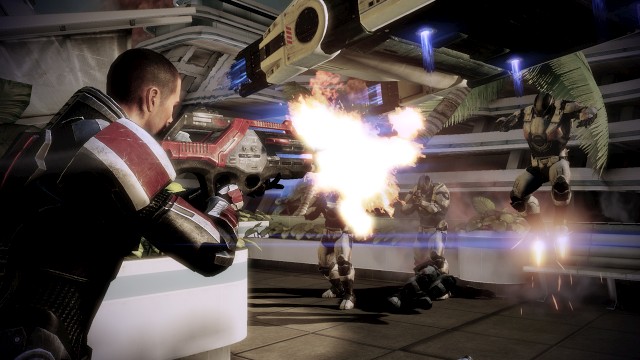 It’s in no small part thanks to the blisteringly tense plot Mass Effect 3 is built upon. After uncovering an aeons old plot to bring around the destruction of the known universe in the first two games, the war against the ancient, evil, devastatingly powerful Reapers has finally begun. Across the galaxy entire worlds are being wiped out, with people of all races, creeds and intergalactic species being obliterated at a rate of millions every day. Even Earth is under fire, and time is quickly running out.

As with other entries into the series, your lead hero Sheppard (be the hardened space soldier a male, female, gay or straight human of any racial background), yet again has to rally the Milky Way against the threat. This time however, he has to win over entire species rather than a handful of warriors. The Mass Effect lore is rich with inter-species rivalries (heck, the Salarians even practically committed genocide on the gruff Krogans), but Sheppard will have to make them unite should life as we know it continue to exist.

Told through some of the best spoken dialogue and incredible cut scenes you’re likely to see in gaming, with a score that swells from orchestral magnificence to taut futuristic synths, it’s an emotional and thrilling tale. With more at stake than ever before, the cast assembled by BioWare in this outing are more fully rounded than any that have gone before. Probing each character with questions, uncovering their back story and making true emotional connections over the course of the game is every bit as rewarding as the action that bookends the game’s exploration and plot exposition. 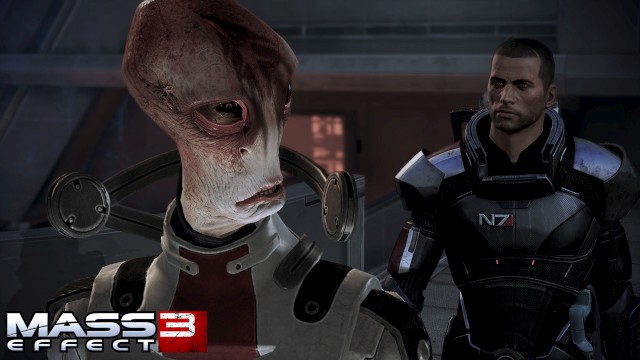 Lets not forget that the choices you make in Mass Effect games define the overall outcome of your game, meaning that every conversation you have, every sacrifice you make or act of selfishness you indulge in game is recorded, changing the branching path of the story that you are told. Your angelic “Paragon” acts will be weighed against your baddass “Renegade” moments, often resulting in wildly different variations of events, and encouraging multiple play-throughs. Remember also that the game does not exist inside a vacuum; should you have played through the first two Mass Effect games you can (as with Mass Effect 2) import your previous Sheppard character, choices and all, into this concluding part. With all the potential choices of the first two games factored in, there are around 1,000 variables in play during Mass Effect 3. It’s as much your story as the one BioWare are telling, and playing through the first two games before starting with Mass Effect 3 is highly recommended.

As with other Mass Effect games it’s pretty much a 50/50 split between exploration, discovery and discussions with non-playable characters and third-person cover-based shooting combat. Straight away you notice that here too BioWare has refined what has gone before. Sheppard can now jump around the battlefield, clambering over rubble and leaping over the odd gap. Overall, levels have more verticality, often tiered to offer different tactical vantage points for each battle. It’s not turned into “Mass Uncharted: Sheppard’s Credits”, or anything like that, but it does add variation to the series’ mostly physically flat battlegrounds. 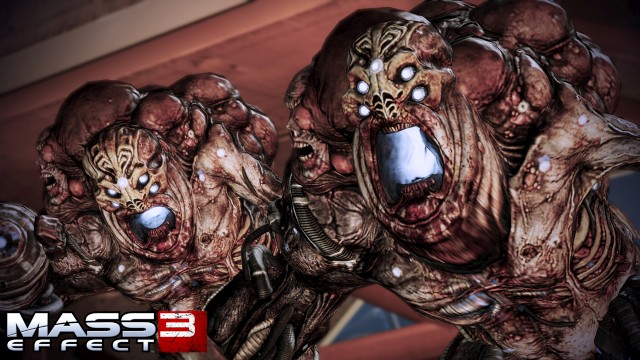 If you’ve decided to build an all new character for Mass Effect 3, you again have the choice of specialising in conventional weaponry, tech, biotics, or a combination of them. Each plays slightly differently, with a weapon based character leading to a more Gears of War style experience than a tech-biotic hybrid in move of an assisting role. Through the story of the game you’ll meet and fight alongside a squad of pals, each also falling into one of these categories, who can be commanded about the battleground. Enemy AI, for the most part, is improved too. Not only is the array of foes more varied than in previous games, but they more clearly work in tandem to flush you out of hiding spots, with a keener sense of self preservation. It’s not perfect, but AI here requires at least a few moments worth of tactical thought before being overcome.

With the level-cap pushed to 60, you’ll likely have to play through more than once to max out every character’s skills, but a tough-as-nails New Game+ mode, paired with the chance to try out different storyline paths, make that a joy rather than a chore. 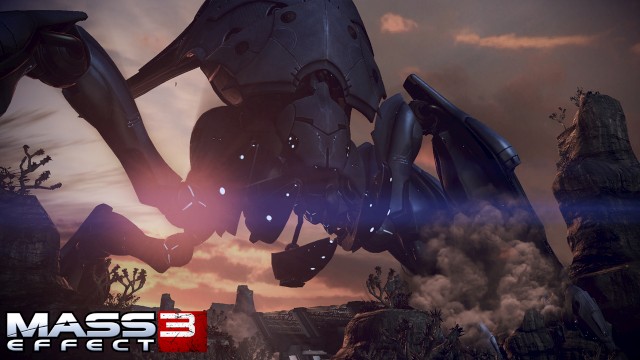 That’s not to say Mass Effect 3 gets everything right. While on the one hand real annoying time-sinks like planet scanning are removed completely (thank God) while the game’s wonderful intergalactic encyclopedia Codex is deeper than ever, the previously often wonderful side-quests are less rewarding than in earlier entries. Fetch quests for space-faring nobodies just don’t resonate when all existence as we know it as at stake. There often isn’t enough tying the side-quests to the over-arching story for you to truly feel invested in them, nor are they thoughtful enough to stand out on their own. They’re far from terrible, but don’t live up to the main drive of the narrative, making a dozen of the game’s 30 or 40 hours feel a little less polished.

Visually, the game looks a treat. Of course, the Xbox 360 is now beginning to show its age, but BioWare have still managed a slight visual upgrade over Mass Effect 2, with sharper textures and more realistic lighting. The game really shines in terms of art direction though; the cast of alien characters are as colourful and thoughtful as ever, and the locations are some of the most memorable in all of science fiction. 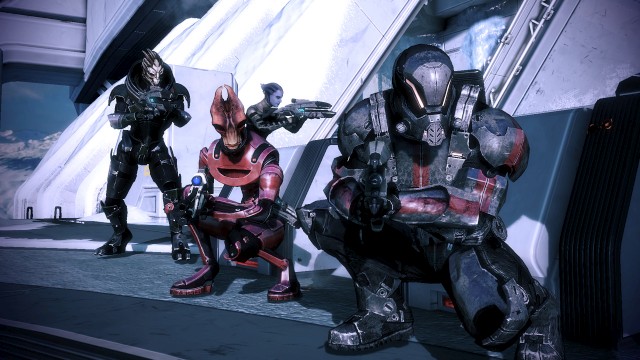 Mass Effect 3 also adds two brand new elements to the series; Kinect integration and multiplayer. We’ll look first at Kinect. Using the Microsoft sensor’s microphone, you can now literally bark orders at your squad mates and see them performed on screen, reducing the amount of time you have to pull up the radial skill selection menu, which slows dramatically the pace of battle. Now, you merely have to speak the commands you want your team to pull of, and thy will be done. As with all voice recognition apps, it’s not always accurate, but when you manage to chain together a handful of commands that see an enemies shields destroyed, rooted to the spot before another character tosses them against the wall, just by having spoken, it’s pretty awesome.

Lastly, the controversial inclusion of multiplayer. We’ve had admittedly little time with Mass Effect 3’s multiplayer modes, and our opinion of them could change drastically once the masses of gamers hit the servers, but for the most part it’s a very fun (if wholly unnecessary) addition. It’s co-operatively based, seeing you take on increasingly powerful waves of adversaries, much like the Gears of War “Horde” mode. You’ll level up, unlock achievements and purchase upgrades alongside three real-world pals. Though it’s not necessary to play through in order to finish the single player mode, its framing story does still play into the larger Mass Effect 3 lore and is worth at least dabbling with for that reason alone.

In short, Mass Effect 3 is pretty much as excellent as you had hoped it would be. The story is perfectly paced, hitting all the right notes and expertly rounding off a beloved series that each individual gamer has helped to shape. The save import system is wildly ambitious, and with everything from visuals to combat being tightened up, a few ropey side missions are easily overlooked. Even multiplayer modes and Kinect integration turn out better than many would have expected, with BioWare delivering on every front they promised to.

It’s also bittersweet though, too. What now for the Mass Effect universe, after the conclusion of the trilogy? We’re already itching to get back into the furthest reaches of space. With any luck, this superb game marks only the beginning of more Mass Effect adventures to come.