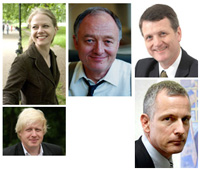 With just 16 days to go until the London mayoral elections, the time has come for you to start doing that last minute research into exactly who it is you want to run the UK’s no.1 city.

Sure, we know who we like the look of, who makes us laugh and who it is that we don’t trust the least, but these aren’t good enough reasons to vote for someone.

You can’t elect a person to govern the lives of 7.5 million people and spend billions of tax payers’ pounds based on personality. Of course you can’t. Instead, like us, look deeper into the real issue at stake, the question of who has a better grasp of web 2.0.

One of the first and most basic web 2.0 tools and the perfect opportunity for candidates to deliver speeches, make party political broadcasts and kiss babies. If they can’t use “The Tube”, they don’t stand a chance with Londoners.

Ken – As you’d expect from the current man in charge and mayoral face of the UK’s governing party, Ken is very much au fait with YouTube. There are clips embedded on most pages and a campaign channel full of videos choose from. Solid work – 30% of the vote.

Boris – Backed by the Tories – who see this as much a chance to win public confidence over their rivals as much as anything else – Boris has had his web presence pimped up to the max. He too has a multitude of embedded clips and a rather tasty YouTube channel as well with 33 subscribers and video diary entries. Impressive stuff from the Rt. Hon. Mr J – 35% of the vote.

Constable Paddick – The Lib Dems are never ones to be outdone by the real slightly larger parties and Constable Paddick has been given full use of the party YouTube channel – not his own I might add but well attended nonetheless with 579 subscribers. Not too shabby – 25% of the vote.

The Lovely Sian – The Green Party were not kind enough to actually link Ms Berry’s campaign website to the party channel on YouTube but you if you look hard enough, you’ll find the odd mayoral speech and a clip or two embedded on the site. I can only imagine that the Lovely Sian was more concerned with minimising the camera crew’s carbon footprint than with getting her message across. A missed opportunity – 9% of the vote.

Batten The UK Independence Party has left Gerard Batten out to dry somewhat. The campaign website’s a bit of Dreamweaver special, clearly designed by some guy at the back of the room who mistakenly put his hand up to say he sent an e-mail once. No campaign or party channel and one measly embedded clip of the party political broadcast that I already saw last night. Oh dear – 1% of the vote.

One borough to Boris

Yes, the creative bastian of web 2.0 that is blogging. Now, there’s a good chance that you wouldn’t want to read any of the daily drivel leaked onto the virtual pages by these close guarded individuals but it’s the thought that counts and in this day and age, if you don’t have a blog, well…

Ken – Now, Ken does have a blog but it’s not really his. It’s the campaign blog, so nothing is written in the first person. Posts include such fascinating titles as “Ken campaigns in Southall” and “Ken on Trams” but does it really count as a blog if it’s not written by him? Sure the other candidates may not really compose their own posts but at least they bother with the illusion. By-election disaster – 25% of the vote.

Boris – Boris has been blogging since 2004 – impressive. However, like his main adversary, it’s not him who writes it and, worse still, it’s not even a campaign blog. No, it’s a blog for his constituents of Henly-on-Thames to receive such important messages as “Boris still here!”, although I’ve a feeling that’s of little comfort to many still hiding in their bomb shelters. Public disgrace – 20% of the vote.

Constable Paddick – The ex-policeman has no visible blog, unless kept under wraps at the Yard and suddenly the Lib Dems appear to be dropping right out of the race as usual. Forgot to go to the polls himself – 0%.

The Lovely Sian – Sian is a blogger, it’s official. Her blog’s pretty well hidden and can only be read on the New Statesman website and it is only weekly but a blog it is nonetheless. She even seems to have the blogging style pretty well down and comes in with confidence-inspiring posts such as “I may not actually win…”. The capital shows its colour – 65% of the vote.

One borough for the Lovely Sian

If the candidates are to show they’re in touch with latest generation of Londoners to get their hands on the ballots, they’re going to have to show they’re down with the kids, trashing houses at Facebook parties, Twittering like nightingales and bookmarking for their friends. So how did they perform in this crucial final round?

Ken – Like all self-respecting candidates, Ken has himself an official Facebook group with 1,687 supporters and a wall full of 144 posts. Solid stuff from the incumbent mayor. However, Ken has completely overlooked all bookmarking possibilities, wasting all opportunities for shameless self-promotion and instead seems more focused on getting the casual browser to donate at every click of the mouse. He clearly has no knowledge of Twitter. A glaring error in the polls – 15% of the vote.

Boris – Boris too has a Facebook campaign group where you can read what a big fan of QVC he is and supporters number a far mightier 5,945. Better still though, Boris even has his own Facebook application where Toriphiles have a forum to discuss exactly which of their gas guzzlers they would like to use to flatten little people who can’t afford cars.

The news you’ve all been waiting for though, is that Boris Twitters and, better still, it could even be his very hands that are hitting the keyboard with such posts as “Watch Ken squirm when asked about crime in London”. No bookmarking tools but impressive – 40% of the vote.

Constable Paddick – Brian Paddick’s Facebook group can rival Ken’s with 1,892 supporters and 175 wall posts and surprisingly, he too Twitters. What’s more, his site is also fully vamped up with more bookmarking options than you can shake a stick at. Good work from the Lib Dems – 30% of the vote.

The Lovely Sian: – Sian has a modest Facebook group of just 492 supporter. No Twittering but she does give it a very good go with the bookmarkers which include newsvine and shoutwire. Well done you Greens – 15% of the vote.

Another borough to Boris

So, as the returning officer, I declare Mr Boris Jonson to be the new mayor of London.

But, wait a minute. Given that the elections are based upon proportional representation, I declare the final results as follows:

So, it’s a lot narrower but it’s clear for all to see, the candidate to vote for as web 2.0 savvy is Boris Johnson, but let’s see how he does in two weeks’ time, shall we?

One thought on “The only election you need to vote in: who is the most web 2.0 savvy of the London Mayor candidates?”