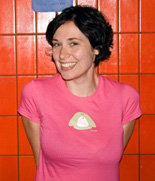 What follows is a summary of some of the points Kevin made. Thanks to the wonders of wireless internet, my connection remained blithely unavailable throughout the entire interview. I know it’s like handing in my homework notes late, but I think I captured the essence…

Kevin Rose’s advice to all new web entrepreneurs is to hold back on getting funding. People tend to want to get funding early so that they don’t have to give up their salaries, but it means giving up a lot of your business and control very early on. If you have a strong idea and don’t need funding straight away, it’s better to work on the idea and flesh it all out a bit before you take any money.

Kevin didn’t have to look hard for funding – a lot of people in the Valley knew they wanted to invest but they didn’t know why – they just knew they had read about them in magazines.

The ideas that people are having for new Web 2.0 businesses aren’t as strong – or are just copies and variations of already existing ideas. Conferences produce a lot of hype around sites, but he hasn’t seen any of the same shooting stars like we did with Facebook, Flickr and Del.icio.us in the early days. After the conferences are over the sites tend to slip back down in obscurity and indifferent web traffic.

You don’t have to be a coder or a hardcore geek to start up a new project, there are plenty of talented geeks out there who can help. The creative idea is the important thing.

Digg is still a small company, still just 40 people, and the key people who were there from the start are still there. It doesn’t feel like a big company, compared to some companies like Facebook which is already heading towards 500. They’ve been doing it for a little over 3 years, and in the early stages they had major issues with scaling and were scrambling around to find engineers who had experience of dealing with that high volume of traffic. Everyone was at Google so all the good people were there, or the good PHP people were at Yahoo. People were scared to take the risk because they thought the bubble might burst. But now more people are willing to take a risk because there are more companies out there, and it looks like more of them are going to make it. 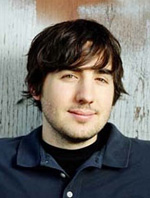 There is currently some gentle flirting going on while Lacy and Rose argue about whose fault it was that Rose ended up on the cover of Business Week with his thumbs up. He’s insisting she never told him it would be on the cover, and they have both called each other a liar. The only way to resolve this issue is to organise an arm wrestle.

The session finishes with a quick fire round (he prefers Obama to Clinton, San Francisco to New York and wine to beer), which culminated in Rose telling Lacy that Business Week is better than Wired and that he really likes their new logo design. And then they kissed*.