It’s the new most annoying thing – neighbours who are really into Guitar Hero and its various clones and spin-offs, and keep organising parties where you have the pleasure of hearing the same song, played over and over again, all night, with the odd jarring “BINK” every time someone misses a note.

If you have a Guitar Hero-playing neighbour, here’s some happy revenge news – two American men have been evicted from their flat for playing too much of the play-along music game Rock Band at night. Sweet, sweet justice. Here’s hoping they fall into drug addiction and prostitution as payback for making their poor neighbours suffer. 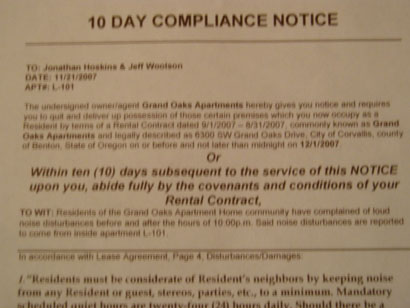 The rather fantastic forum thread, entitled “Rock band got us evicted,” can be found over on the game’s official forum.

And far be it for us to go passing judgement on this without knowing all of the facts, but it’s more likely to be your blatant disregard for your neighbours that got you evicted, rather than the game itself, lads.

For more news about games and gaming and consoles to play them on, remember to check out Shiny Media’s Games Digest.