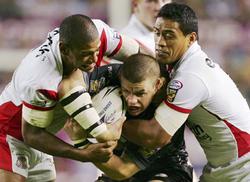 Not content with the football, cricket and golf, Sky is adding rugby league to its high definition coverage.

Sky Sports will start showing rugby league in HD when the new season of the engage Super League commences. Super League games, playoff matches and the Grand Final at Old Trafford in October 2007 will be produced and broadcast in HD – whch could get a little messy when the teeth and punches start to fly. Still, it’ll be good preparation for the inevitable introduction of boxing in HD.