Did you enjoy having the web? It sure has been a hoot having it around. I’m certainly going to miss it. We’d better get the most of it while we can, now that the BBC has decided to bring it crashing to its knees…

Susi's lethargy is obviously setting in as she looks at the Samsung Infolink television. Our quote of the trip so far has to be "anyway, there's stuff," which actually sums up this television pretty well. It's got an ethernet connection built in which allows the telly to connect to the internet…but don't get too excited, it doesn't allow you to surf the web, but pulls in RSS feeds on stocks, news and weather and displays them on screen. In the US the service is provided by USA Today, and a UK partnership should be revealed very soon…

On Monday, the "social media aggregator" TIOTI — which stands for "Tape It Off The Internet" — came out of beta and launched to the general public. It claims to offer a "one-stop source for TV content" online, aggregating the…

The SciFi blog has reported that a number of Windows Vista Home Premium and Ultimate users have received a Media Centre software upgrade which gives them access to a beta version of Microsoft Internet TV. It offers a selection… 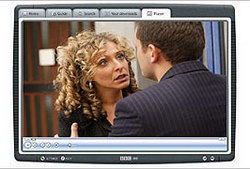 The BBC has announced that an open beta trial of its iPlayer will launch next month. It joins Channel 4’s 4oD service — reportedly doing quite well — for those who want to sit at their PCs and watch highlights of the last week’s TV.

Stuart has already extolled the virtues of “Telly 2.0”. BT are heavily marketing their Vision service, and 4oD can be accessed via BT Vision and Virgin Media.

Are the BBC slow off the mark? When the beta launches next month, it’ll be for a select band of Windows XP users only, with other versions potentially rolling out over the following months. Having said that, Channel 4 still have licensing and technical issues with protecting their content – their excuse for not getting the service to work with Macs (or indeed, any other non-Windows system).

According to a BT spokesman who spoke to Interactive Investor, BT's long-awaited BT Vision Internet TV service is due to launch next Monday, 4th December….

BT is set to secure content deals with some major Bollywood studios for its BT Vision Internet TV service launching next month, according to The Business magazine. Hanif Lalani, group finance director, told them that they were near to securing…