Though there have been spy shots and Mr Blurrycam fakes of the next iPhone model knocking about online for months now, Engadget have uncovered what is seemingly the first legitimate shots of the iPhone 4G. And believe it or not,…

Now a German website has got some crafty pics of the new handset, which have picked up by Crackberry and other sites, that definitely prove it has Wi-Fi on board.

Google Wave seems to be massively dividing the tech community at the moment. Some people expect it to revolutionise the way in which we work and reposition Google once more as an incredible innovator while others are a lot more cynical.

Mac fanboys aside, most of us realised that the Macbook Air was a crystallisation of everything that Apple does – it was an archetypal Apple product. The ridiculous price, the underperforming components, and lack of features, but OH SO PRETTY! That’s why I’m a little nervous that Dell are trying to emulate the machine.

The New York Times, after noticing a few ‘Adamo’ trademark filings, did some digging on Google and eventually confronted Dell’s vice president in charge of consumer sales and marketing, Michael Tatelman, asking him if there was an Air-like product in store. His response? Click over the jump to find out. 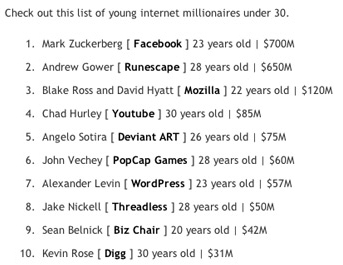 Hey gals! And potentially boys! Fancy snagging yourself an internet-famous millionaire? We’re not just talking crusty has-beens like Al Gore either, we’re talking hot, sweet, under-30 year olds who still have their own teeth.

Although Jake Nickell from Threadless is on the list, so I may have to retract that last claim, he’s surely been wearing falsies for years now due to their incredibly slow international postage and lots of angry customers.

Ryan Block, Editor of Engadget (#11 on the list) however has claimed… 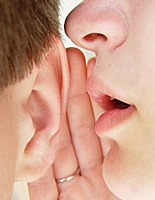 Poor Apple. One blog post about an iPhone delay based on a faked internal memo, and $4bn is wiped off its stockmarket value. Which has to make you wonder, what in God’s name will happen to Apple’s share price if the iPhone turns out to be rubbish? It’s a thought.

Another thought: could this happen to other tech firms? What sort of crazy rumour would send Microsoft’s stock diving, for example, or grind Sony’s share price into the dust? Weeell….