One of the most revered strategy titles of all time gets a fresh lick of paint in XCOM: Enemy Unknown. Can this modern remake of the much-loved sci-fi classic ever live up to its predecessor? Read our full review to find out!

1994’s X-COM is, aside from the ongoing Civilisation series, perhaps the greatest turn-based strategy game ever. Putting you in charge of a crack squad of soldiers defending the world from alien invaders (and handing over control of the minute details of running a top secret military operation in the process), it was an addictive slice of B-Movie action that taxed your grey matter as much as your yearning to spill some green E.T blood.

However, with the IP changing hands more times than a five pound note down the bookies, leading to an ever-worsening string of XCOM titles bearing the once-hallowed name, many worried we’d never get to experience the same quality sci-fi paranoia ever again. This fear was multiplied by the announcement of a first-person XCOM game (currently in a state of development limbo) that seemed to offer little familiar to the XCOM line other than a few aliens and the name itself. 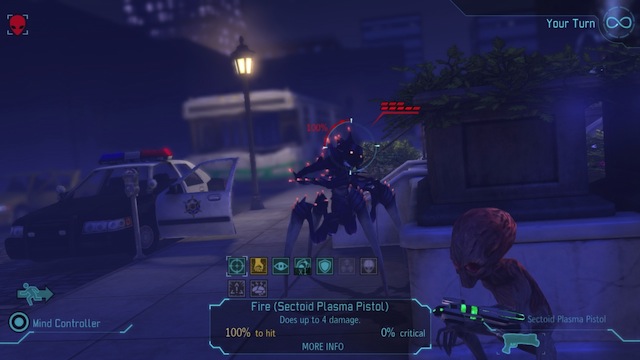 That we’ve got Firaxis’s XCOM: Enemy Unknown at all then is remarkable. That it’s turned out as good as it has is out of of this world.

Much of the core XCOM gameplay remains the same. You’re still in charge of an elite group of operatives from around the world, out to foil an alien invasion in progress. You’ll acquire financial backing from nations across the globe in return for defending their lands from the otherworldly threat, and with their funds will research new weapons and extra-terrestrial technologies in order to get the job done. If you’ve played the previous games before, this will all feel very familiar, and while there’s plenty to take in for newcomers, comprehensive in-play tutorials mean all players will hit the ground running.

Play is split up into two main parts; combat and base management. Combat takes place on turn-based maps, and makes up the crux of the action elements of the game, while base management (which also includes researching new gear, managing your XCOM soldiers, dealing with government officials and building new wings to your underground headquarters) makes up the rest of the game. It’s roughly a 50/50 split between these two modes. 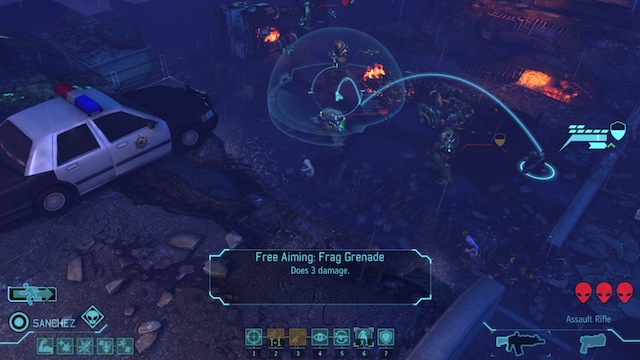 Lets look more closely at combat first. Missions see you traversing the globe, stamping out the alien threat one map at a time, which earns you cash to spend during the base management mode. Sometimes a mission will see you simply needing to clear out all the alien nasties in sight, or collect a piece of alien equipment to research, while others task you with helping civilians caught in the intergalactic crossfire to retreat to the safety of your Skyranger landing craft.

As mentioned earlier, combat in XCOM is a turn-based affair. Older XCOM games managed this with a tile system; each squad member could use action points to move a certain number of spaces or fire a weapon. In Enemy Unknown, that’s been streamlined significantly. Rather than use tiles, the 3D engine instead puts a cap on the distance a player can move. Move a short distance and you’ll be able to fire off a shot at the enemy before your turn has ended too, but move further forward in one go and you give up the chance to fire. It’s intuitive and easy to learn thanks to clear onscreen instructions and movement boundaries that hover over the map.

Introducing a cover system for the first time, knowing when to push forward and when to hunker down for a defensive bonus is one of the key, tense elements to XCOM’s combat; visibility on the sizeable maps is limited until you explore them, and if you’re not careful your Rambo antics can see you quickly overwhelmed by forces that you didn’t even know were lurking in the darkness. With each new alien species harbouring different skills, you’ll have to be ready to adapt to many different threats during each mission. Though randomised maps have been swapped out in this XCOM instalment for hand-crafted ones, the varied alien designs keep you on your toes during each mission. Whatever the difficulty level, it’s a tough challenge, but always a fair one. 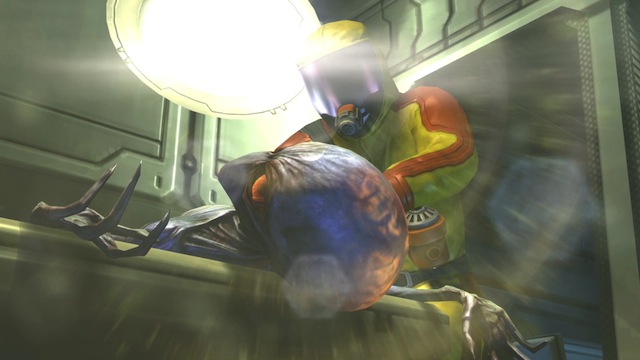 Aliens have all manner of special abilities at their disposal beyond laser fire, but so too do your teammates. As you progress, your squad will unlock new skills and classes based on their performance; a “Heavy” XCOM soldier will be able to wield a rocket launcher, while a sniper will get an increased chance of a critical hit, for example. With all actions in XCOM’s combat based on a behind-the-scenes dice roll, these skills become invaluable to your chances of success.

With all environments being fully destructible, shootouts can quickly descend into organised chaos; there’s nothing quite like causing a building to collapse on a gang of big-headed sectoid aliens who’ve been keeping you team pinned down by firing a rocket launcher at their hideout. Destructible cover further adds to the excitement and strategic elements of each round; it’s simply not enough to dig in and hope for the best. You’ll have to move all the time or face being flushed out by an enemy that always seems to know the maps better than you do.

Previous XCOM games put you in command of dozens of soldiers at once during each battle, but Enemy Unknown puts you in charge of a maximum of just six at any one time. Rather than limiting strategic choice, this gives you a closer kinship with your squad mates, who can be fully customised. You’ll come to really care for your squad, and with death an irreversible action in the game, you’ll curse and cry when one of your most useful squaddies passes away to later have his or her boots filled by an easily-panicked recruit. 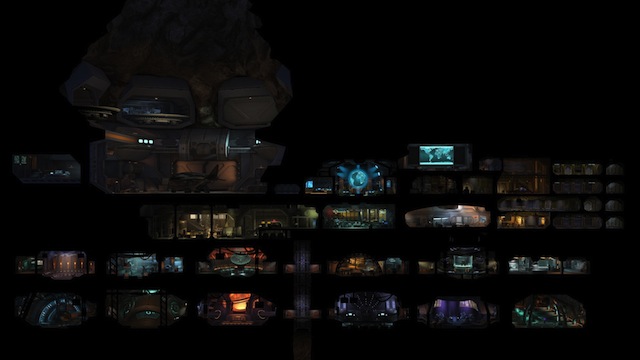 If combat has one shortcoming, it lies with the maps themselves. They’re just a bit too small. That’s not to say they’re not fun; the tightness of each encounter leads to intense gun battles. But those looking to use a wide map to pull off a mad flanking move or harness retreat and regroup tactics will be disappointed. Similarly, though the battles take place across the globe, environments (though pretty) tend to lack defining features that’d mark out a battle in Tokyo as being different to one in Germany.

Success in combat lets you head back home with extra funding to take on the management aspects of the game. Head over to the barracks and sharpshooting squadmates may be due a promotion, which brings with it another chance to upgrade their powers. The research labs may have unlocked a new piece of alien weaponry that you uncovered during a previous mission, or engineering may have finished building a new section of your base, such as an alien containment lab for carrying out interrogations on captured aliens. You’ll need to assign new projects to each department, but with very limited funds you’ll have to juggle priorities.

In past XCOM games, this has been a case of trial and error, pushing funding into a project that perhaps wasn’t of vital importance early on without you realising until it was too late. Taking a cue out of Civilization’s books, in Enemy Unknown you’ll have a team of advisors to help you make some of the more crucial decisions early on. That’s not to say they’ll hold your hand the whole way through the game though; it’s very easy to pump money into an area of research that later proves not as important as another, and you can easily find yourself far into the game without the means to deal with progressively tougher enemies. 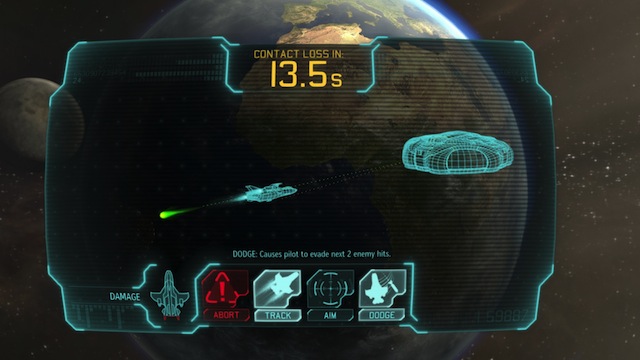 Perhaps this will be because you didn’t put enough funding into satellites to spot enemy craft, or bolstered your own aircraft’s defences for when they go to shoot down little green men. But rather than being a failing of the game, it’s also part of the fun. Discovering the best course of action, and how to adapt to the changing nature of each individual campaign is one of the most rewarding parts of XCOM, and when you manage to put together a super-powerful endgame squad, you’ll feel suitably powerful as a result.

Enemy Unknown’s single player mode alone would have been enough to fill the appetite of strategy gamers who’ve long missed the series, but Firaxis have also thrown in a multiplayer suite too. Here, you’ll build a six man squad pooled from both alien and human units, and are given a finite pool of points which which to customise their attributes and abilities before pitting them against another player in a deathmatch mode.

There’s great scope for experimentation here, and finding the right balance of squad members and abilities is a fine art, not to mention putting your own wits against those of a wily human opponent. It’s a shame that you cant save more pre-made squad details for each differing battle; as it stands you only get one saved squad slot. If you want to make a new team to take online, you’ll have to remake it each time, which can drag on a bit. It remains a truly exciting addition to the franchise though, and one that will sink many hours beyond even the extensive single player campaign. 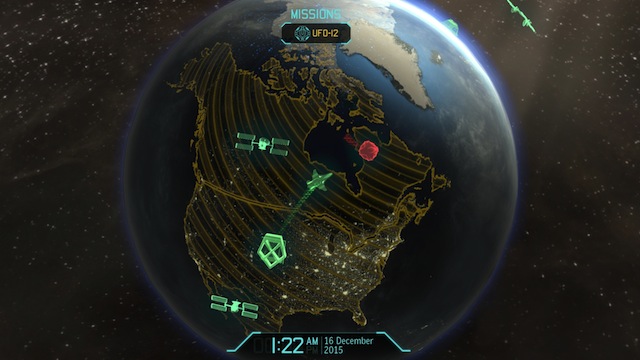 XCOM: Enemy Unknown is a fantastic rebirth for the long-beleaguered XCOM series. Purists may argue that the lack of larger randomised maps have watered down some of the strategic combat elements, but the streamlined approach to Enemy Unknown makes it the most accessible XCOM yet. That it can manage this without losing the stiff challenge of its predecessors, and retain the B-Movie charm of the sprite-based original, is superb. Abduct a copy now.