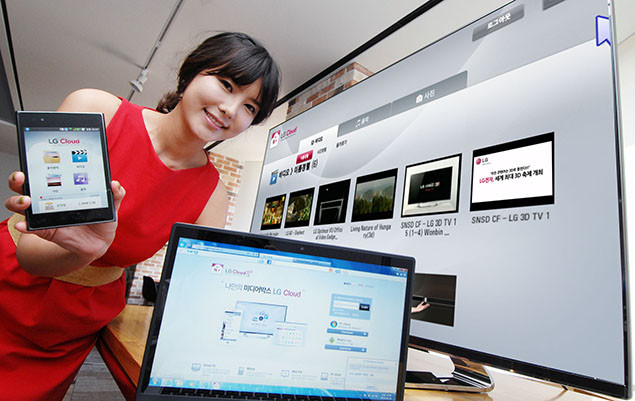 LG have lifted the covers off their own cloud-based service, simply called the LG Cloud.

The LG Cloud will allow an owner of an LG smartphone and LG Smart TV to share content between the television and the handset, as well as a PC, with multiple file types and content to be supported across each platform. For instance, photos and videos could be recorded on an LG smartphone, and beamed instantly to both a TV in the living room and a laptop on the other side of the world.

LG also believe that they’ve got the problem of incompatible video files sorted, using a proprietary Real-time Streaming Transcoding technology to ensure your content will work flawlessly no matter what the file type or codec on any of the supported devices.

LG also states that the service has robust support for 3D content streaming, which will cause the handful of owners of both an LG 3D TV and LG Optimus 3D handset to go all misty eyed.

Both free and paid-for versions of the LG Cloud are expected to launch, with pricing and availability to be announced in time with the services roll-out to each individual territory.

It’s a timely move by LG, what with rival Samsung widely expected to be launching it’s own “S-Cloud” cloud-based service alongside the Samsung Galaxy S3 handset this Thursday.