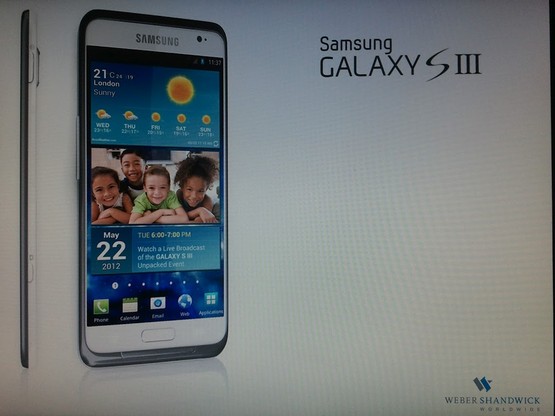 Another day, another Samsung Galaxy S III leak. This time Samsung’s superphone sequel has turned up on Reddit in yet another leaked picture, showing off a different design and new potential release date.

Design-wise, it looks pretty good, sporting a very thin bezel, almost edge-to-edge screen and a mix of black and white shades on its bezel. It looks quite different to the Galaxy S II, but not in a bad way.

In terms of UI, if the image does prove to be fake, the counterfeiters have made good efforts to stay in keeping with Samsung’s current interface choices, popping in five icons in the lower dock as with the Galaxy Note, and the long physical home button embedded in the bezel.

On the screen is the date May 22nd 2012 and the time 6pm on the calendar, detailing a live broadcast of a launch event on that hour. This is the first time the Galaxy S III has been associated with the date, so we’ll be waiting for official word from Samsung before giving too much weight to the rumoured launch date.

There’s also the “Weber Shandwick” logo in the corner, a PR team that Samsung have worked with in the past. However, with Samsung’s public relations currently handled elsewhere, it adds a whiff of fakery to the image.

We’re marking this one down as fake for the time being, although we’ve got to admit we’re quite smitten with the two-tone design.