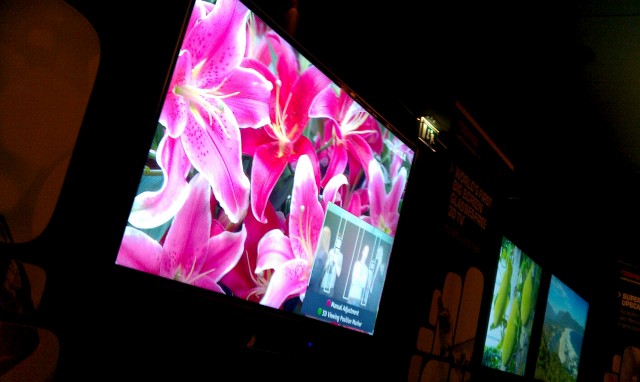 Toshiba have used their Spring showcase to announce the availability of their ZL2 glasses-free 3DTV.

The screen will hit John Lewis stores first, available from Monday 15th March, before heading over to Harrods.

So what does that get you? For starters, you can drop the hassle of having to wear 3D glasses, as the ZL2 is capable of adding depth to its images through the use of an auto-stereoscopic panel.

The 3D effect itself is quite understated, having more in common with the feel of a Nintendo 3DS screen than you’d expect from a glasses-based system. There are numerous sweet spots dotted around in front of the screen in an arc at a distance of about 2 metres, 5 of which clearly offer the 3D effect.

As you’d expect, the most profound 3D effect is experienced from directly in-front of the screen, though a calibration tool allows you to shift the “master” sweet spot, should your sofa of choice be situated in the corner of the room. This is achieved through a web cam built into the svelte frame of the television, which tracks the positioning of the heads of those watching.

Perhaps even more impressive however is the screen’s resolution. Offering a whopping quadHD resolution of 3840 x 2160, the screen could be split 9 times with each section getting a 720p resolution.

Of course, there’s no 4K content available from broadcasters right now (Toshiba use a native feed from a prototype box to demo the screens), but it’s very much a future-proofing purchase. In the mean time, upscaled images from 1080p Blu-ray sources were pin sharp and strikingly vibrant too, thanks to the Resolution+ and multi-core Cevo Engine processing platform technologies built in.

It costs a small fortune, but it’s about as cutting edge as TV tech for the home gets right now. Should you have a spare seven grand laying around the house, head over to the flagship John Lewis store on Oxford Street in London on Monday; it’s the one shop exclusively selling the ZL2 at launch.

One thought on “EYES-ON: Toshiba ZL2 glasses-free 3DTV, on sale this Monday”