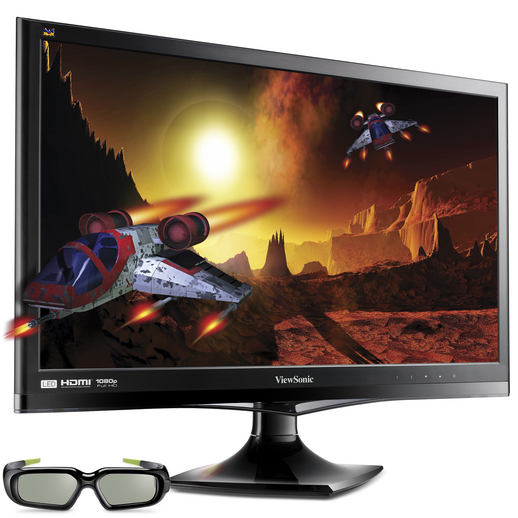 Like it or loathe it, it seems 3D is here to stay, be that on your living room TV, your local cinema screen or even in your pocket on a mobile device. 3D’s near-imminent ubiquity even extends to the office, with 3D an increasingly common feature of the latest PC monitors. Just like all other 3D gadgets though, 3D monitors can be a pain to set up with multiple compatible devices needed, as well as needing a fair amount of cash to being with. ViewSonic’s latest offering, theV3D245, aims at both affordability and ease of use with it’s built in Nvidia 3D Vision transmitter and accompanying glasses. But is it any good? Read on to find out.

Though we’re not fans of a glossy, fingerprint-harbouring chassis when it comes to monitors (especially ones that use touch-sensitive controls) the ViewSonic V3D245 doesn’t look half bad, with its angular base and row of touch buttons on the monitor’s lower left side. A 24-inch monitor, you’re getting roughly a 23.6″ visible screen. Set up is a breeze thanks to the refreshingly simple slide-in base, locking with an underside key. However, those looking for manoeuvrability beyond a little tilt will be disappointed. The screen is wall mountable though, which is still a rare feature for what, despite its bells and whistles, remains essentially a PC monitor.

Regardless of its 3D smarts, the screen stays relatively slim at 2.2″ thick (not including the stand), thanks to its exterior brick battery. Input connections are solid; you get DVI (Dual Link), VGA, Audio In and Audio Out ports, as well as a single HDMI 1.4a port. We’d have liked an extra HDMI port, which would have been particularly handy for those looking to hook up a games console or two to the display as well as a PC. The monitor also has 2-watt stereo speakers built in, which of course don’t offer too much bassy grunt, but are perfectly serviceable thanks to SRS Premium Sound tech.

While ViewSonic’s OSD is clear and self explanatory (if visually basic), using the touch buttons to tweak settings is a chore. They’d sometimes fail to register our fingers, and though we’re all for slick clean lines in design, here’s one case where we’d rather had physical buttons to push.

Maxing out at a Full HD resolution (1,920 x 1,080), the V3D245 is a solid performer with 2D imagery, with crisp text and graphics throughout. Though the claimed 20,000,000:1 dynamic contrast ratio is ridiculously ambitious, that’s not to say that black levels are in any way poor. Blacks are inky and detailed, with the LED backlight evenly distributing light. Colours were bold too, but erred a little on the saturated side without a bit of tweaking. Viewing angles horizontally are perfectly reasonable, though dim noticeably long before the 170º angle ViewSonic claim. Vertical viewing angles are less effective, though this is unlikely to cause much concern in the majority of usage scenarios.

Billed in many ways as a gaming screen, pro Call of Duty fans will have the words “120Hz refresh rate” and “2ms response time” ring out like music to their ears. Movement is smooth and free of flicker and tearing, which is great for those long frag matches, and has obvious benefits for the V3D245’s headline feature, 3D content.

And, thankfully, ViewSonic’s 3D here delivers in spades. After a clumsy start with wired 3D glasses on their previous V3D241wm model, ViewSonic have made the sensible move of partnering with Nvidia and popping its 3D Vision tech right into the monitor itself.

Nvidia’s 3D PC solution has been knocking around for a little while now, but their combination of comfortable wireless active shutter glasses (provided here with adjustable nose-bridge inserts and good for 60 hours of usage per USB charge) and flexible software makes it possibly the best example of 3D tech available right now, not least of all when it comes to 3D gaming. It requires a compatible Nvidia graphics card (GeForce 8800 GT or later; GeForce 9600 GT or later; all GeForce GTX 200 cards or GT300 Series, NVIDIA GTX400 Series or later if you’re hooking up a HDMI 1.4a games console – we were using a GTX 560 Ti card), but is simple to set up, and more importantly, simple to tweak.

Using the Nvidia Control Panel software, you can adjust the intensity of the 3D effect, making it as eye-popping or subtle as you see fit. As the compatible Nvidia cards manipulate the way traditionally 2D games are displayed, a vast number of PC games can be played in 3D through the 3D Vision set-up with minimal fuss, even those that we’re never intended to be played with an added dimension. It’s engrossing and clear thanks to the quality of the panel, with minimal drops in brightness and hardly any noticeable flicker when the glasses are on. With HDMI 1.4a certification you’ll also be able to play 3D games from a PS3, as well as 3D Blu-rays, each again offering equally, startlingly impressive 3D visuals.

While its build is a little rough around the edges (those touch buttons annoy in particular), the simplicity of having Nvidia’s 3D Vision tech so seamlessly integrated into the display is a joy. Superb in both 2D and 3D, the ViewSonic V3D245 will be more than enough for even the most demanding of 3D gamers.