The LG Optimus 7 is the company’s flagship Windows 7 Phone. It has all the goodies that Microsoft insists on as part of the Windows 7 standard – like a five mega pixel camera and plenty of storage – but to that spec LG has added a whole lot more. Here are five features that caught our eye. 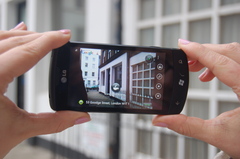 ScanSearch – So far the LG Optimus 7 is the only Windows 7 Phone to boast this really cool feature. ScanSearch is LG’s version of Augmented Reality. Using the LG Optimus 7’s camera, GPS and web connected abilities all at once, the ScanSearch AR app can help you find the hottest nightspots, best restaurants and useful amenities around you. Just enter what you’re searching for and watch as the smartphone screen becomes an interactive map, updating in real-time and giving you directions to your location of choice.

Play To – Another very cool feature the LG Optimus 7 lets you wirelessly transfer songs, pictures and video files from one device to another using its Play To feature. Syncing up with PCs, TVs and other Play To compatible devices, you’ll be able to send and share your handset’s files without ever needing to use a cabled connection. You just go to the Play To feature on the phone, chose the content you want to transfer and flick it to transfer it. It is neat and very simple.

Panorama Shot – Panorama shot options have been available on cameras for a while now, but very few mobile phones have them as part of their spec. The Optimus 7’s camera panorama mode is not only great for creating extended view images, but it also very simple to use. It enables you to stitch together multiple photos to create one seamless widescreen shot.

Exclusive LG apps – The LG Optimus 7 has many other cool apps which are available from the LG app store. One very cool app is the Photo Stylist option. This helps you create even more interesting photos by using filters. So for example you can use the Lomography filters to make the image look as if it were taken by a Lomo camera. Alternatively use Mono to make the shot black and white or Rainbow to create a cute image that looks as if it has been taken by a toy camera. Like all LG apps Photo Stylist is very simple to set up and use.

Other great free apps available from the LG apps store include Workout Track which enables runners to record track speed, distance and calories burned and Voice to Text which transcribe your words and turn them into text. 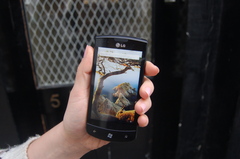 Office on mobile – Whether we like it or not, we all have to use our mobiles to do a little work. LG’s Optimus 7 makes this simple by including a version of Microsoft’s Office on board. You go to Documents on the phone and you can then view, edit and even create a host of document types including Word, Excel and Powerpoint. The phone’s touch screen makes it very simple to move between the documents quickly too.

So do you fancy one? We are giving away six – click here for more details