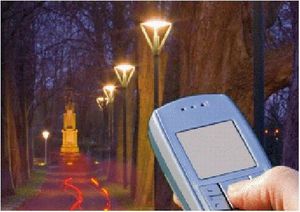 You’ve got to hand it to the Germans. Certain movements in the earlier parts of the last century might not have done too much for the national image but by golly are they making up for it now. They’ve basically got everything sorted. Their trains run to the second, they’re big on beer and meat and now they’ve found a way to cut their electricity bills by 25% without upsetting anyone.

You see, inventor Dieter Grote has designed a system for the town of Morgenröthe-Rautenkranz whereby the streetlights can be controlled by mobile phone and so left switched off at night until needed.

The way it works is that you register online for the Dial4Light scheme and call the number followed by specific codes, found either on the website or the lamp posts themselves, and, voila, your path is then lit for 15 minutes after which time the lights turn off again and the expensive power consumption ends. Now that, my friends, is good tech.

Yes, the individual has to pay the small cost of the local call but, then, I’ll bet they make a lot more than that back in reduced council tax bills or better town amenities. Damn it, sometimes I wish we could be a little more European this side of the Channel.