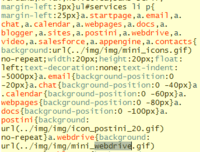 The rumours around Google’s GDrive, which we reported on the other day, look to be gaining steam. First, there was a mysterious menu option appearing in Picasa for Mac, and now code’s been added to Google Apps that references a ‘webdrive’. There’s even a little icon for it.

I’ll reiterate my comment from the other post – this isn’t likely to be ‘unlimited’ storage. People have too much crap for Google to allow that, and most of that crap is dubiously-acquired intellectual property like movies, games and music. Google’s had problems with that with YouTube, so I find it unlikely that they won’t put restrictions on the service.

More likely, we’ll see a limited storage, limited file upload service that doesn’t do very much more than what you can already do with Google Docs and Google Mail. When will we see it? My money’s on ‘fairly soon’.