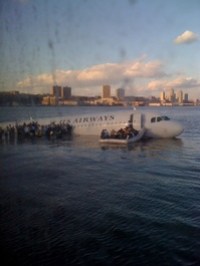 Score another one for citizen journalism. The very first photo of the plane crash in the Hudson was taken on a mobile phone, and uploaded to Twitter. The photographer was one Janis Krums, and he was on one of the ferries used to rescue the passengers from the stricken plane.

Although you could say he was in the right place at the right time, the quality of the photo is pretty damn good as well – well framed, and with plenty of detail. On a side note, though – you’ve got to wonder if it’s the first class passengers that are on the raft, while the economy plebs have to stand on the wing…