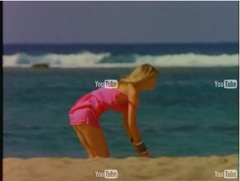 While YouTube might be taking its time upgrading the resolution of uploaded videos, one enterprising developer has coded up a web page to display a synchronised YouTube video wall, allowing four videos to be played almost seamlessly.

It all feels a bit hit and miss, and relies on someone creating four videos, one for each quarter of a much larger original video.

Given that the highest non-widescreen YouTube videos currently play at 480 x 360 resolution, creating a 2×2 wall offers up a 960 x 720 video. It’s not quite high definition, and there’s definitely some judder, not to mention the YouTube watermark plastered all over the screen, but it’s an interesting experiment.

An even more realistic video could be created by using a service such as Viddler, which doesn’t force you to use a watermark.

I can’t see this catching on in a big way, but it’s a cool proof of concept. What we really want is lots of decent high definition content online, though not necessarily of Rick Astley.