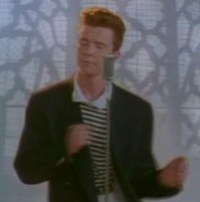 The big Rickrolling meme from earlier this year may be somewhat past its sell-by-date, but you’ve got to salute the effort one intrepid netizen put into giving thousands of people a burst of the old Astley. Turns out that the creationist website Anti-Spore, which we previously reported on, was a fake.

The latest post, this morning, purported to explain the author’s beliefs and why she was running such a site:

“I think part of the problem that is going on here is that the bulk of you are ignorant as to the word of God. I don’t have these beliefs just because I want to, I have them because they are the beliefs that I was raised in. I understand that everyone didn’t have the chance to be taught these things, and learn about God as my family did so if I am going to have this kind of attention I should use it to help teach others about the words of God that helped to shape me into the woman I am today.”

The post goes on to quote some verses from Genesis, but then finishes with:

“21. The LORD smelled the pleasing aroma and said in his heart: “Never again will I curse the ground because of man, even though every inclination of his heart is evil from childhood. And never gonna give you up.
22. “Never gonna let you down.”
23.”Never gonna run around and desert you.”
24. “Never gonna make you cry.”
25. “Never gonna say goodbye.”
26. “Never gonna tell a lie and hurt you.”
27.”Never truly believe anything you read on the Internet. There will always be cases of Poe’s Law.”

Poe’s law refers to internet debates, like Godwin’s law, and states that without a winking smiley or blatant display of humour, it’s nearly impossible to create a parody of fundamentalism that *someone* won’t mistake for genuine beliefs.

There’s still a small question mark over the site, because someone claiming to be the admin popped up in the comments saying that the site had been hacked. If that was the case, though, then why is the post still live? There’s also the suggestion that this is a marketing trick by EA. If it was a marketing trick, then my hat’s off to them – it worked!

Oh, and be sure to check out the comments to giggle at the people who haven’t actually read the post and still don’t realize it’s a hoax.

Related posts: Will Wright discusses how much he hates EA | Spore to be released for Wii and Xbox 360

One thought on “UPDATE: Creationist rage at Spore was an elaborate Rickroll”