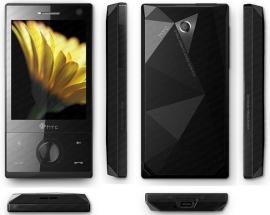 HTC has today announced what we were all expecting, the touchscreen Diamond smartphone which is due to be the follow-up to the popular consumer-led Touch.

Running on Windows Mobile 6.1 Pro, it lacks a hardware keyboard, with the 2.8″ touchscreen being an obvious draw. As expected, it’s 3G enabled, with Wi-Fi, Bluetooth, GPS and a 3.2-megapixel camera. An impressive internal storage of 4GB, it also features a microSD slot within its 10.7mm of thinness.

Whilst Windows Mobile 6.1 isn’t that much of a jump from the 6.0 OS we’re now accustomed to, HTC has popped its own software on over the top for a more user-friendly navigational system. With the accelerometer-like sensors, users will discover the display will flip easily between portrait and landscape dependent on the position it’s all at, similar to that of the iPhone.

Contrary to the previous HTC-endorsed Internet Explorer, the Opera browser will be offered, plus the ability to ‘zoom’ in for a closer look at sites, which will be configured for mobile use.

The Touch Diamond is due to launch in Europe in June first on Orange, with other networks to follow. The US launch is slated for Q3. As most of the world knows, the 3G iPhone is expected to be announced (and released) in June, with recent reports suggesting that RIM would be delaying the launch of their first 3G offering from June to August, in light of this.

Pricing is as yet unconfirmed by HTC.