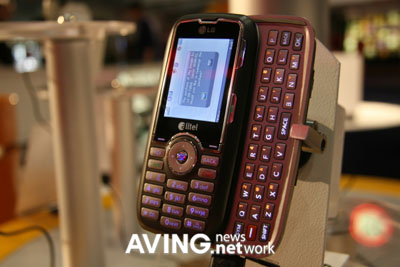 Am I supposed to be impressed just because this phone has a QWERTY keyboard, because I’m not. I’ve got an old IBM 486 lying around somewhere that’s got one of those but that doesn’t make me want to carry it around in my pocket.

The mechanics of the LG Scoop, just announced at CTIA Wireless, are excellent and it’s a really neat way to store the keypad and reduce the size of the handset, but that seems to be all this mobile-come-smartphone has going for it. If it’s aimed at the texting generation, it’s done well to include mp3 playback but where it’s criminally short is with its pathetic 1.3-megapixel camera.

Hasn’t that become an acceptable defence for kicking someone in on the streets? “I had no choice, your honour. He only had a 1.3-megapixel camera on his phone.” Case dismissed.

After that glaring error, what young texter’s going to care about the wireless capabilities of the handset and the GPS function when they’re sucking their food through a straw?

The LG Scoop’s available in Citrus, Slate and Turquoise, or yellow, black and blue to you an me, which is interesting because that’s exactly what you’ll look like if you buy one.